Rich village in China checked out by North

Rich village in China checked out by North 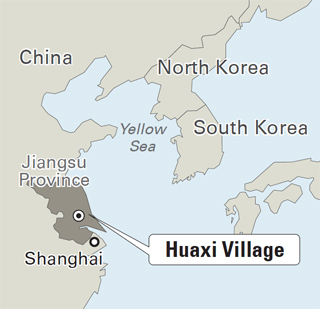 Is new North Korean leader Kim Jong-un starting to cross the river by feeling the stones, as Chinese economic reformer Deng Xiaoping put it in 1984?

For the past six months, seven working-level North Korean officials have been staying at the Longxi International Hotel, located in a 72-story skyscraper in Huaxi Village, in China’s Jiangsu Province, a local government official told the JoongAng Ilbo in a telephone interview.

They’re allegedly trying to learn the secrets of Huaxi Village, known as China’s richest village but one that is still dedicated to socialism.

As news from Pyongyang suggests Kim Jong-un is getting a greater grip on North Korea’s military by sacking his former protector and promoting a lesser known military figure, many analysts have speculated that he may be winding down his father’s “military-first” policy to start to reform the local economy.

China has exhorted North Korea to take the path of more economic openness and reform for years. Kim’s father, late leader Kim Jong-il, resolutely ignored its advice and stuck to the “military-first” policy to keep complete control of the hermetic nation.

The North Koreans visiting Huaxi may be a sign of his son’s more open attitude toward economic experimentation and a greater willingness to follow Deng Xiaoping’s opening of the Chinese economy starting in the late 1970s.

Huaxi Village is one of the richest places in China and a symbol of a model mixing socialism and capitalism. All the residents are shareholders of the local conglomerate and earn dividends at the end of every year according to its profitability.

“Roughly 20 North Koreans recently toured Huaxi Village,” a local resident told the JoongAng Ilbo. “The seven working-level North Korean officials have been staying in the village for six months learning how to manage a modern-style hotel.” Intriguingly, all seven are women.

“Officials from North Korea’s Foreign Ministry and the North Korean Embassy in Beijing also visited the village,” the resident said. “I’m not quite sure whether the women workers are from the ruling Workers’ Party, but they are mostly in their 20s.

“They have a great interest in learning about the dramatic growth of the village,” he continued. “They reportedly receive some kind of wages [from North Korea].”

Starting in 1978, the village’s residents actively participated in the reforms led by Deng Xiaoping. Wu Ren Bao, 84-year-old local secretary of the village, said in an interview with the JoongAng Ilbo in October 2011, “We accepted whatever was needed to make people rich and develop the village.”

Abandoning ideology for pragmatism, the villagers accepted a key capitalist notion: “The more work, the more paid.” Today, the village is dotted with European-style residential apartments with luxury foreign cars parked in their front yards.

“We are closely watching the possibility that Kim Jong-un will accept the proposal of China to open and reform its economy,” a South Korean source said.

Pyongyang’s commission to attract foreign investment issued a press release recently which gave specifics on investment conditions in the communist regime for foreign investors, clarifying electricity fees and office rental fees, which was an unusual move.

“The Swiss-educated Kim who experienced life overseas at an early age is demanding change,” Jeong Chang-hyeon, a professor at Kookmin University, said.