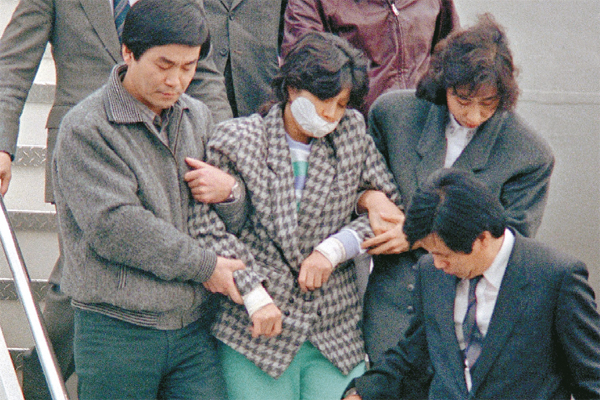 In this Dec. 15, 1987 file photo, agents escort North Korean spy Kim Hyun-hee with her mouth taped shut as she arrives in Seoul from Bahrain. The U.S. State Department yesterday declassified 57 documents on the mid-air explosion of Korean Air 858 Flight on June 11, 1987 that killed all 115 aboard.


The U.S. Department of State declassified 57 documents on the mid-air explosion of Korean Air Flight 858 on June 11, 1987 that pin the blame on North Korean agent Kim Hyun-hee.

The documents, which had been confidential, were mostly letters from the U.S. Embassy in Seoul to the State Department in Washington starting the day after the plane blew up and continuing until Kim received a special pardon from Roh Tae-woo in April 1990. They were put on the State Department Web site.

Liberals in Korea have doubted the government’s blaming of Kim and North Korea for the bombing of the plane for years.

At around 2:05 p.m. on Nov. 29, 1987, the South Korean airplane carrying 115 passengers disappeared after communicating with a ground control tower in Burma. Departing from Baghdad, the plane was en route to Seoul via Abu-Dhabi and Bangkok. All of the passengers died.

Two North Korean agents disguised as a Japanese father and daughter planted the time bomb in an overhead compartment of the airplane on the Baghdad-Abu Dhabi leg. They deplaned in Abu Dhabi and tried to fly to Amman, but ended up in Bahrain, where they were about to be taken into custody for having forged passports. The man, Kim Sung-il, smoked a cyanide-laced cigarette and died. The younger woman, Kim Hyun-hee, had the cigarette snatched from her mouth by police.

Kim was flown to Seoul and arrested by South Korea’s state security agency. Liberals have said for years that she was set up for the crime by dictator Chun Doo Hwan. In 2004, under the administration of president Roh Moo-hyun, a presidential committee launched a probe into the incident again and concluded that Kim was indeed a North Korean spy.

The documents declassified by the U.S. included:

A document written by the U.S. Embassy in Seoul dated February 1988 that says the investigation of Kim Hyun-hee was carried out “in a situation we controlled.” It said a linguistic analysis of Kim Hyun-hee’s Jan. 15, 1988 statement demonstrated the words she used were North Korean,” backing up a CIA analysis. 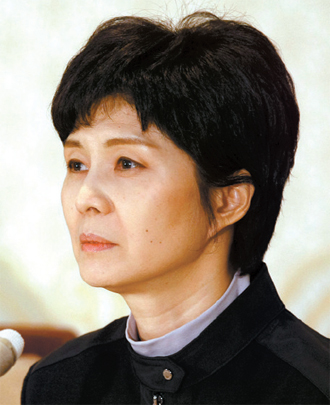 In this March 11, 2009 file photo, Kim Hyun-hee attends a news conference with relatives of a North Korean abductee in Busan. [AP/YONHAP]

“Ms. Kim picked out photographs of three North Koreans who had contacted her in Belgrade and Budapest,” the report said. “Then three photographs were picked out of a collection of 26 shown her, and in each case, the individual she picked was in fact a North Korean agent posted in that city at the time she was there.”

Another document dated January 1988 describes Kim’s arrest and transport to Seoul in December 1987. It was written by the U.S. embassy in Seoul.

“As time goes by, she realizes that life in South Korea was drastically different from what she had been taught to believe … on December 23, she suddenly collapsed upon the breast of a woman investigator, saying, ‘I am so sorry’ in Korean for the first time and began to confess in Korean the details of her terrorism.”

Korean president Chun Doo Hwan apparently wanted Kim to be shown the reality of South Korean life. “Pressure would not have worked, he said,” a report written by the U.S. Embassy in January 1988 to Washington said. “Chun said the investigators had been resourceful; they had brought her new dresses, taken her to the roof of the 63-story DLI building, and had impressed her with the new South Korea.”

Another report written in January 1988 said that former North Korea leader Kim Jong-il ordered the two terrorists to blow up Korean Air passenger planes in an attempt to “discourage other nations from participating in the 1988 Seoul Olympics,” and the instructions were allegedly in his own handwriting.

Chun reportedly ruled out military retaliation against North Korea because he believed the two former leaders of North Korea - Kim Il Sung and Kim Jong-il - were insane, according to a report by the U.S. Embassy in Seoul in January 1988.

“Chun said that in dealing with Kim Il Sung and Kim Jong-il, we were dealing with a mentality that was both sick and incorrigible,” the report said.