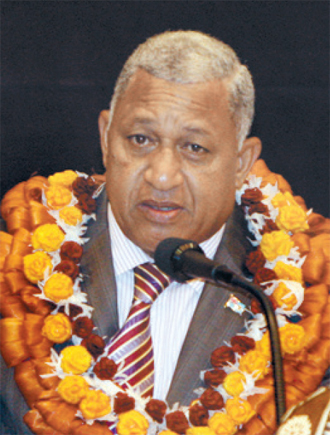 
The Republic of Fiji, an island nation in the South Pacific Ocean, opened an embassy in Seoul yesterday, 41 years after Korea and Fiji established diplomatic relations in January 1971.

Filimone Kau has been named Fiji’s first ambassador to Korea.

“The opening of the Fijian Embassy in Seoul will help solidify diplomatic relations and business ties with Korea,” Ambassador Kau said.

“Through various diplomatic activities, the embassy will work to boost the interest of the people from both countries.”

Fiji has been trying to diversify its trade relations with countries in Asia, shifting its focus from nations closer in proximity like Australia and New Zealand.

Previously, the Fiji Embassy in Japan had overlooked Korean affairs.

Korea opened its embassy in Suva, Fiji’s capital, in 1980.

“There is room for cooperation between Korea and Fiji on areas such as telecommunications, social infrastructure and medical technology,” said Prime Minister Bainimarama.

“Fiji has high investment value and we will offer many incentives to foreign investors.”

The prime minister is also in town to attend Fiji’s National Day event at the Yeosu Expo tomorrow.

Fiji is one of the countries participating in the international event being held in Yeosu, a southern port city in South Jeolla.