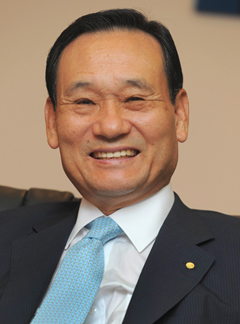 Spurred by worsening profits and a gloomy outlook for the global economy, Woori Financial Group declared yesterday it will roll out an emergency management program and pledged to take tough austerity measures.

The country’s largest financial services firm by assets announced that it will undergo an extensive cost-cutting program dubbed “Slim Management” across all subsidiaries amid growing uncertainties in the business environment.

“We were the first in the Korean financial sector to overcome the 2008 global financial crisis by running a task force team for emergency management,” said Chairman Lee Pal-seung.

“In the coming months, we have to prepare for a changed environment in the financial industry, which is expected to generate low growth and low profits.”

The foremost goal is to refrain from making large investments while seeking preemptive measures to secure liquidity, the group said.

An investment plan above a certain level will be thoroughly reviewed by analysts.

The group’s move came as the country’s economic outlook worsens and its second-quarter earnings are expected to fall.

The group said that default rates on household loans are on a continuous rise and its credit card unit is also struggling to make profits.