Alliance to boost production in Busan

Alliance to boost production in Busan 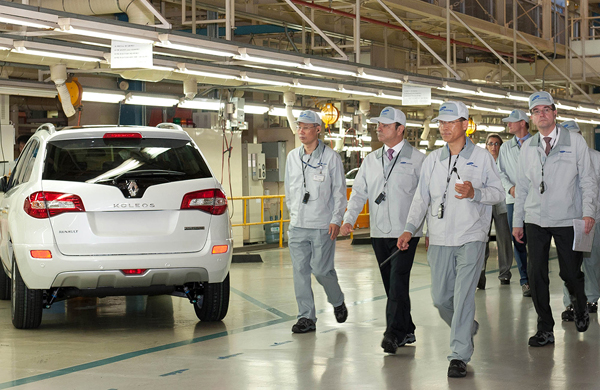 Renault-Nissan Alliance Chairman and CEO Carlos Ghosn, second from left, takes a tour of the Renault Samsung Motors plant in Busan yesterday. Provided by the company

“Adding production in Korea shows a commitment across the alliance to helping Renault Samsung Motors achieve its targets for cost competitiveness and growth,” said Ghosn, who visited company’s factory in Busan and its design research center in Giheung, Gyeonggi, before holding a press conference yesterday.

“Every opportunity from outsourcing of the Rogue will benefit Nissan and Renault,” he said.

During a visit to Korea last month, Chief Operating Officer Carlos Tavares said his Renault Group plans to make Korea an export hub for the Asia region, an announcement seen as evidence of Renault’s commitment to RSM.

The Korea’s fourth-largest automaker, RSM, sold 30,648 vehicles in the domestic market and exported 52,414 vehicles from January through June, on-year drops of 41.7 percent and 26.1 percent, respectively.

Last month, the company sold 4,008 units in Korea falling behind Ssangyong Motor, which sold 4,330 vehicles. It was the first time in seven years that RSM was fifth in monthly sales among domestic carmakers.

Industry sources say the Busan plant has a production capacity of 300,000 vehicles, but operating at an annual rate of 18,000.

The Brazilian-born Ghosn said the company’s production cooperation “represents a unique win-win-win for Renault, Nissan and Renault Samsung Motors, demonstrating the flexibility and power of the Alliance for all partners.”

Addressing For RSM’s performance in domestic market, Ghosn said: “It is very simple. We were lacking competitiveness. But this is a wake-up call.

“If we believed RSM doesn’t have cost competitiveness, we would not make this investment”

Nissan already has a history selling RSM-built sedans in the Middle East and Africa.

Despite the investment announced yesterday, some doubt whether RSM will be able to survive until Renault’s plan takes effect in 2014 without additional assistance in the domestic market.

The automaker plans to release facelift models of the SM3 and SM5 for the remainder of the year and will not introduce a new model until late next year. RSM only has four models: the SM3, SM5, SM7 and QM5.

RSM is scheduled to introduce a small crossover vehicle and release an electric vehicle - the SM3 Z.E. - next year.

Two years ago, RSM had a market share of 10 percent, but last year it fell 8.3 percent and is expected to be even lower this year.

“If we get the work from Nissan, we will be able to stabilize our labor force,” said an official from RSM. “This will boost our effort to revive our sales performance and upgrade our price competitiveness.”

In the end, said Ghosn, “RSM will be a key asset for the group.”