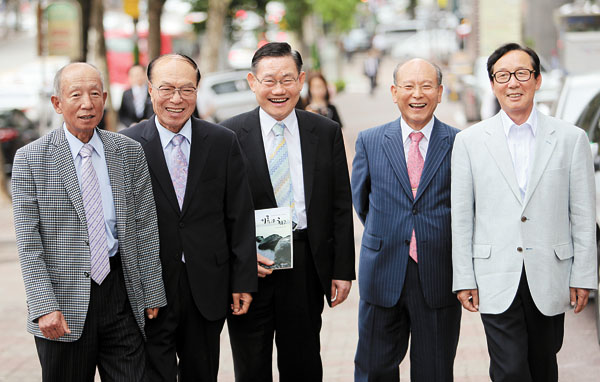 Lee Kyu-hwang, center, smiles with co-authors “Achievements & Recollections.” The book goes behind the scenes of Korea’s transformation into the Asia’s fourth-largest economy. The writers were part of Suh Il-kyo’s first “elite pool” who entered public service in 1971. By Kim Hyung-soo


Suh Il-kyo, former minister of Government Administration, came up with the idea of an “elite pool” system in 1969 to recruit 200 highly qualified candidates for government jobs each year.

Working for the government has not always been Koreans’ idea of a dream job. Four decades ago, salaries were less than a third of those in the private sector.

Nonetheless, Suh pushed ahead with the reform plan that some criticized as “elitist.”

His efforts to widen the doorways to work in public service bore fruit in 1971, as 200 people took their first jobs in government.

Among the first 200 was former Strategy and Finance Minister Yoon Jeung-hyun, then 25, who scored the second highest on the exam.

The group that was the first to take the retooled civic service examination in 1971 were directly involved in laying the cornerstone for the “Miracle on the Han River,” a reference to the country’s rapid economic development.

In the 41 years since, South Korea, one of the world’s poorest countries in the early 1960s, has grown to become the world’s 15th-largest economy.

The recently published book “Achievements & Recollections” is written by 13 former and current government officials who passed the first reformed Higher Civil Service Examination 41 years ago. In the book, the 13 co-writers tell the inside story of the creation of national pension and health insurance systems and the bombing of a Korean Air jet in 1987 and the arrest of the suspect, Kim Hyun-hee.

Also addressed is the government reaction to the Asian financial crisis in 1997 and its effect on Korea’s economy.

“Civic workers need to work in the spirit of Team Korea; they are working for the general interest of the country, not for the interest of a particular political party or group,” said Choi Zhin, a former diplomat in China. Choi was expressing his concern about the meddling of politicians in government service in a recent interview with the JoongAng Ilbo. And his concerns are shared by his 12 co-authors as the December presidential election approaches.

Former Health and Welfare Vice Minister Kim Yong-moon added that politicians should not intervene in the “welfare-policy areas on a solo mission to win votes.”

Another senior member of the club observed today’s public workers could stand to learn a thing or two from their predecessors.

“Civil servants in the past had this sense of duty that they were leading the nation for the people,” said Lee Kyu-hwang, vice chairman of the Pharmaceutical Industry Association.

“We all shared this notion that the country would fall behind for 20 to 30 years if we didn’t do what needed to be done, and public servants these days often seem to be lacking this sense of pride and mission.”

Lee told the Korea JoongAng Daily there are many areas like the “education market where public workers should take lead to discover new economic engines.”

“We have witnessed Korea rise from a country ridden with poverty to the Asia’s fourth-largest economy with $20,000 per capita income,” said Choi Soon-hyun, secretary general at the Korean Institute for Economic & Social Development. “We hope this book serves as a teaching lesson for today’s civil servants.”