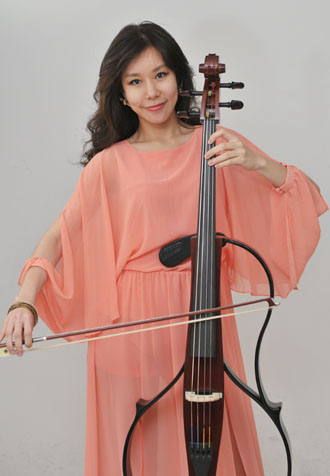 Electric cellist Oh Ah-mi, 29, will serve as a visiting professor this fall at Dankook University’s department of applied music.

The musician’s debut album “Tiara” was well received, with her marketability and image likened to Vanessa-Mae, the famed electric violinist from the United Kingdom.

Oh’s lectures will be held three to four times during the semester as supplements to mandatory classes. Music students majoring in composition, vocals, jazz piano, drums, saxophone and lead and bass guitar will be eligible for the course.

“I see this as a good opportunity to introduce the diverse musical world of electric cello to the students studying music,” Oh said.

She said she expects her lecture to be a “stepping stone for students to approach electric cello more easily.”

“Though performing an electric cello requires a wide range of notes and technical bravura, the general public finds the sound relatively pleasing compared to wooden cellos due to its catchy timbre,” she said.

“I’m planning on organizing a splendid performance with a band of students.”

Oh started playing the cello in the fourth grade while studying in Korea, and she had also studied abroad thereafter.

She also graduated top of the class from Gennevilliers National University of Music in Paris.

After she completed the performers’ course at the French national university of music, she went on to pursue a master’s degree at the State University of New York at Stony Brook. During the degree program, she won the regional competition of the Miss Korea Pageant 2007 as Miss Gyeonggi, putting a halt to her academic career in the state university in the Big Apple.

A year after the beauty pageant, she started playing the electric cello, in 2008.

“Playing electric cello like a guitar was my own conclusion after exploring the possibilities of how to bring classical music closer to the public,” Oh said.

“Cellishe,” her second album released in 2010, catapulted her to fame. At the request of the Ministry of Culture, Sport and Tourism this March, she performed in an event introducing modern Korean music in Costa Rica and Mexico.

The musician said her stint as a visiting professor does not mean she is retiring from her performing career. She said her goals are to become a world-renowned cellist and travel the world on tour.

“I want to become a world-class performer playing both classic and electric cello,” Oh said.