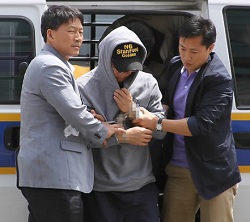 Korea’s top court has confirmed a 22-year prison term for a former college professor who murdered his estranged wife and disposed of her body with the help of his girlfriend, court officials said yesterday.

The 53-year-old professor, surnamed Kang, was convicted of strangling his 50-year-old wife in his car at a hotel parking lot in the southern port city of Busan in May of last year, then placing her body in a bag and throwing it into a river in the city.

The Supreme Court also upheld a five-year prison term for his lover, known only as Choi, for assisting Kang, according to court officials. “Kang meticulously plotted and carried out the crime by choosing a place from which he could throw the body and purchasing a bag for the body in advance,” court records showed.

At the time of the killing, Kang, a professor of computer criminology at a university in South Gyeongsang Province, was in the process of divorcing his estranged wife after a year-long marriage. A Busan district court previously handed down a 30-year sentence to Kang and a 10-year term for Choi. However, an appellate court in April reduced Kang’s sentence by eight years and halved the prison term for Choi.