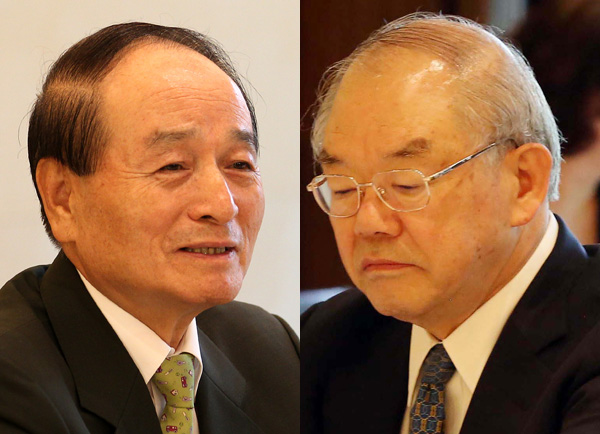 
The decision on whether to fire Suh Nam-pyo, 76, president of Korea Advanced Institute of Science and Technology, was abruptly deferred yesterday.

Kaist’s board of directors was scheduled to vote on a motion to terminate the remaining two years left in Suh’s contract at a meeting in a hotel in central Seoul, and it was known in advance that Suh’s champions were outnumbered three to 16.

But after thirty minutes, 72-year-old Oh Myung, chairman of the board, declared that the motion to terminate the contract had been suspended indefinitely as Suh has “entrusted all the decisions to the board.” He added that the board will “respect the president’s position as much as possible.”

Suh said at the meeting that he agreed with the board chairman in his “principles and beliefs on the school’s reforms.”

Suh assumed duty in 2006 and is the first Kaist president to serve two consecutive terms, being re-elected in July 2010. He instituted ambitious plans in 2007 to raise standards at the university, which led to greater pressure on students, who were required to attend lectures in English and keep grades above a certain level to maintain their scholarships. Five students committed suicide in recent years.

Oh sat down separately with Suh for two hours prior to the board meeting yesterday in order to address the current state of unrest in the university.

Suh requested the chairman clear all the slander surrounding him. “Once the truth is revealed, all decisions will be entrusted to the chairman of the board of directors,” Suh said at the meeting.

This spring, relations between the faculty and Suh became ugly. A faculty council accused Suh of stealing a patent of a Kaist professor, and Suh sued four professors for defamation in March.

There are different interpretations as to what will happen hereafter.

On Monday, Suh said he had “no intentions of resigning of his own accord.”

Kwak Jae-won, a member of the board of directors, said after the meeting that the talks between Oh and Suh indicated that a way had been opened up “for President Suh to avoid termination of contract and to resign honorably and voluntarily.”

But a Kaist spokesman indicated that Kwak’s views were his own and that Oh and Suh “did not discuss anything about voluntary resignation or dismissal.”

Between January and April of last year, four Kaist students committed suicide, and Suh’s reforms were attacked. Another student killed himself later. Oh requested Suh to step down in December to take responsibility for the problems in the school’s administration and the students’ suicides.

In February, the university’s association of professors sent a letter to Suh saying it suspected that the president stole a patent from a professor. The case is currently in the middle of a prosecutorial investigation.

Suh’s legal counsel, Lee Chang-hee, said yesterday in a briefing after the meeting of the board, “President Suh plans to see the issue of the allegations of patent theft to be investigated first and afterwards will come to a decision voluntarily.”