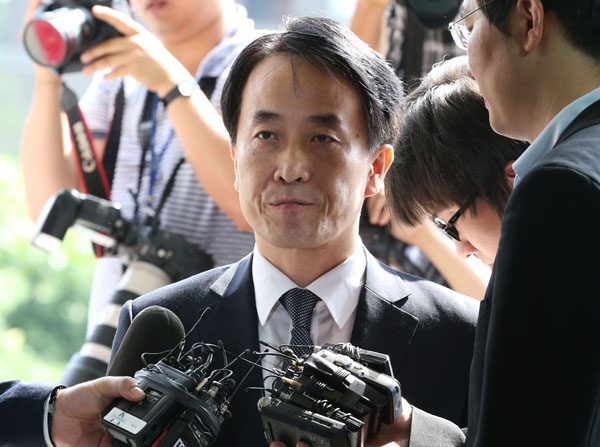 
One of President Lee Myung-bak’s closest aides answered questions by prosecutors over whether he took bribes. Kim Hee-jung, 43, former personal secretary and so-called “doorknob” to the president, appeared before the Supreme Prosecutors’ Office in Seocho-dong, southern Seoul, at 9:55 a.m., yesterday.

“I will take the prosecutors’ investigation sincerely,” Kim said when reporters asked about the allegations against him. Kim didn’t answer questions and went into the prosecution’s office.

Kim is accused of receiving at least 100 million won ($87,700) from Lim Suk, chairman of Solomon Savings Bank, over time. The joint investigation team under the central investigation unit of the Supreme Prosecutors’ Office questioned Kim for more than 12 hours.

The prosecution alleges that Kim and Lim have been maintaining friendly relations since 2008, and it suspects that Lim gave money to Kim in 2010 before his bank faced financial trouble. Kim has denied the allegations. The prosecution is expected to request a warrant to detain Kim as early as next week. The investigation was conducted in a room in the 11th floor of the prosecutor’s office, the same place where the president’s elder brother Lee Sang-deuk and Representative Chung Doo-un of the ruling Saenuri Party, also embroiled in bribery cases, were questioned.

Last week, the Hankook Ilbo reported that a joint investigation team of the prosecution has obtained testimony from Solomon’s Lim that he gave the bribes to Kim. Following the report, Kim stepped down from his position at the Blue House July 13.

Kim is the president’s third key associate under investigation for graft allegations following Choi See-joong, former chairman of the Korea Communications Commission and also political mentor to the president, and Lee Sang-deuk, the president’s brother.