Ballerina leaps into limelight with determination and grace

Ballerina leaps into limelight with determination and grace 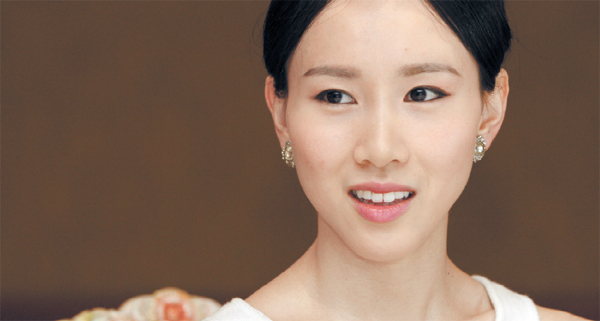 Korean ballerina Seo Hee was promoted to the position of principal dancer with the American Ballet Theatre on July 6. [JoongAng Ilbo]


Korean ballerina Seo Hee was on cloud nine well before the plane carrying the American Ballet Theatre troupe for “Giselle” took off for her home country.

The 26-year-old ballerina had been promoted to the position of principal dancer just weeks before and she had performed in the lead role as Giselle for the troupe’s Korean tour, which ended yesterday.

Seo is the first Korean ever to hold the position and the first Asian dancer in 20 years.

“It’s been about two weeks, but I still can’t believe that I am a principal dancer. I am still the same Seo Hee but with a different title,” said Seo in a roundtable interview Wednesday.

“I want to become the principal dancer who performs up to the name of the American Ballet Theatre.”

Seo joined the ABT, one of the three most prestigious ballet troupes in the world, in 2004 and became a member of its corps de ballet in 2006. In August 2010, she was promoted to soloist.

“Seo not only has a gifted figure for a ballerina but also has an ability to express emotions that is crucial in classical ballet,” according to the ABT.

The prima ballerina performed three times during the five-day run of “Giselle” at the Seoul Arts Center, southern Seoul.

Q. You mentioned that you never expected to get promoted this early. How did you feel after the announcement?

A. On the day of the announcement my name was on the schedule to have a meeting with the artistic director, Kevin McKenzie. As it is quite rare to have a one-on-one meeting with the artistic director, my friends at the company told me that it might be about my promotion, but I told them I was certain that it wouldn’t be. When I was promoted to soloist, I was eager to obtain the position, but honestly, I wasn’t like that this time. Performing as a soloist opened up a new world for me. So I was happy with my position and enjoyed every moment. That’s why this promotion came to me as a surprise. I didn’t expect it. I also feel burdened at the same time because I am the principal dancer of the American Ballet Theatre and I should always present a performance that lives up to its reputation.

You injured your ankle during a practice last year. Didn’t you want to give up dancing?

I tore a ligament in my ankle while practicing “The Nutcracker” last year and the doctor told me I would have to undergo a surgery and need at least a year for rehabilitation. I was angry at myself at first, but I tried to stay optimistic and thought this was an opportunity to learn more about myself. I thought I knew my body well and that I took good care of it, but I realized that it wasn’t enough.

And to my surprise, the doctor told me after several treatments that I wouldn’t need to go through an operation and I was able to recover within five months.

During the rehabilitation after the injury, I never thought I wanted to give up, but throughout my whole ballet career I thought about it quite often. I bet all dancers go through a similar phase. One day you are so happy with your career, but the next day you feel like you want to quit. When your body has a hard time keeping up with your mind, you feel like quitting. But we all know that’s just a phase.

What do you think your strengths are? When do you feel most confident?

Before the curtain goes up I am very confident. Before every performance, I practice with all my effort and learn fully about the piece so I feel like I am ready to perform.

But when the curtain gets dropped at the end of the performance, I don’t feel as confident. I feel like I have to practice more, learn about it more because I keep thinking that I could’ve done better.

I think my biggest strength is knowing that I have a lot to learn and upon which to improve.

Among renowned dancers, I like Mikhail Baryshnikov. He is a charismatic dancer with a deep artistic inner self.

I also want to say that the members of the corps de ballet are my role models. No one recognizes them or knows who danced where in what position because they dance in groups. But for every performance they take part in, they give their 100 percent and I admire that.

Some people compare you with the renowned Korean ballerina Kang Sue-jin and say you are on the same level or even beyond her.

Unless one takes the role, he or she can’t fully understand the difficulty of the character. And “Onegin” is a very difficult piece and I didn’t know that until I took the role. I’ve seen many ballerinas performing Tatiana, but I’ve never seen one who can beautifully express such a difficult ballet like Kang. I admire her ability.

It’s more impressive when you watch such proficient dancers like Kang up close and witness firsthand the smallest gestures of their fingertips and eye movement. All dancers - including me - have to look at the big picture first. You have to understand the big picture first to work on even the smallest detailed movements of your body. And Kang is a veteran dancer who cares about the small pictures in addition to the big picture, and I know that I am nowhere near that.

I am a ballerina, but I want to be a dancer who can also be called an artist. Ballet is a mixture of art. It has music, it has acting and it has stage design. It’s not only about dancing. So I want to be an artist who understands art as a whole so that I can move the minds and touch the hearts of the audience through my performance.

What advice would you give to young ballerinas?

Many young students ask me how much I practice every day or how many toe shoes I wear every day. I practice a lot and I wear many toe shoes. But this is a matter of course. As a dancer, it is a matter of course to put all your effort into practice before standing in front of the audience. What I want to tell them is that such effort needs to continue even on the days you don’t want to.

It is very hard to practice when you don’t feel like it, but you must.