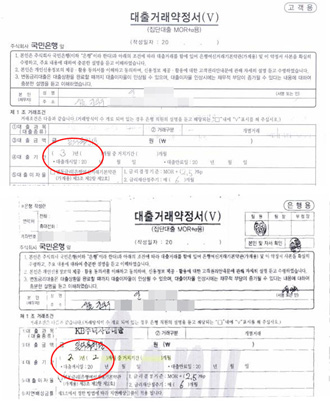 KB Kookmin Bank stands accused of tampering with loan documents without the consent of borrowers, further straining the credibility of local financial institutions.

The lenders are coming under fire as suspicions continue to grow over whether they colluded to rig benchmark lending rates.

Although the KB admitted to having used forged loan contracts, the bank said this represented a breach of trust by its employees and was never a move sanctioned by headquarters.

Some 30 people who have taken out syndicated loans from the bank filed a lawsuit with the prosecutors’ office and lodged an official complaint with the financial regulator.

The controversy is being investigated by police in Seoul.

According to those suing the bank, its employees used a sharp tool to scratch out the original due date on their contracts to make it shorter. In the original contract, the lenders were to repay the principal within three years, but the figure was falsified to two years and two months.

“We acknowledge the wrongdoing, but it was purely a misjudgment of our staff,” said a KB Kookmin Bank employee. He said the bank’s headquarters were unaware that lenders had agreed to the longer term as they only authorized the contracts after the changes had been made.

“The employees were supposed to call everyone who had taken out the syndicated loans and tell them the date had been changed,” the employee said. “But as the interest rate on syndicated loans is lower than on other loans, the employees didn’t make the calls because they thought the borrowers would pay the loan back within two years anyway.”

He also blamed the real estate market, which has been mired in a slump since late 2008. This has led many syndicated-loan borrowers to not repay the principal on their loans as a form of protest. Some have even refused to move in to their new properties, arguing that they are victims of false advertising as they were led to believe that the value of their apartments would shoot up rather than down, leaving them saddled with huge debts.

Insiders say many such homeowners have requested loan extensions, while others have sought compensation for the financial and psychological harm they claim to have suffered.

The bank said those employees who are accused of tampering with the documents have either retired or been assigned to other affiliates of KB Financial Group.

The bank said it has accepted customers’ complaints and extended the due date to three years, in line with their original contracts. “No financial losses were inflicted on our customers,” it said in a statement yesterday.

The controversy surfaced at a time when the financial industry is under severe criticism for allegedly colluding to fix the rates on certificates of deposit (CD). CD rates are used as a basis to set the interest roans on a number of loans and other financial products. 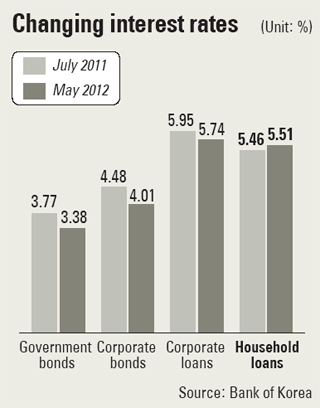 A new finding shows that the average interest rate on household loans stood at 5.51 percent in May, a high not reached since it posted 5.46 percent last July. Meanwhile, the rate on corporate loans has fallen.

Overall, market interest rates hit a high of 5.98 percent in May last year but fell 0.22 percentage point to 5.74 percent a year later. The drop is mainly due to rate cuts for corporate loans, which track bank debentures and financial bonds.

The data showed that the benefits of the overall decline in interest rate went to the corporate sector, while households, which are struggling with total debt of around 850 trillion won ($745 billion), received no gains.

“The CD rates clearly do not reflect the market rate, with households being forced to pay the extra costs,” said Cho Young-moo, a research fellow at the LG Economic Research Institute.

Others, such as Jeon Hyo-chan, a senior researcher at the Samsung Economic Research Institute, said because the CD market has become so small, it has lost its ability to act as a foundation for setting rates.

As of end-March, loans tied to CDs made up almost one-third of total won-based lending, or 324 trillion won of the 1,080 trillion, despite the small size of the CD market, which stood at just 2.4 trillion won.

The financial regulators said they have been trying to get lenders and brokerages to devise a new system to set “fair” rates for household loans, but have received little cooperation.