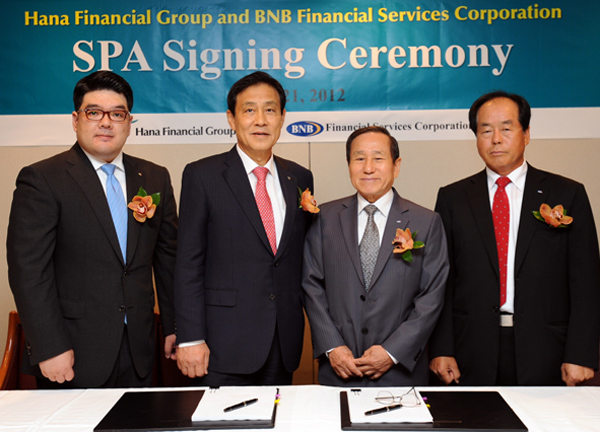 
Hana Financial Group has found a way to expand into the U.S. Midwestern market.

According to the Korean financial group, it acquired a 71 percent stake in U.S.-based BNB Financial Services on Friday.

BNB Financial Services is the holding company of a Korean-American financial company BNB Bank, formerly Broadway National Bank, which was found in 1986 in New York.

This is the only Korean-American bank with a “national bank” license, which puts it under the strict surveillance of the U.S. Office of Comptroller of Currency (OCC) to shore up its credibility.

Another advantage of a national bank is that there are fewer regulatory restrictions when establishing branch offices in different states. Hana said it hopes to utilize this advantage and expand not only in the eastern part of the U.S. but also in the West and Mid-west.

“We have to build a solid foundation to offer a comprehensive range of financial services in the U.S. market thanks to BNB Bank, which specializes in retail finance,” said a Hana official.

The acquisition process will be finalized once the Korean Financial Services Commission and the U.S. Federal Reserve Board give their approval.

As Korea’s financial market is saturated with banks and other lenders, Hana has been looking abroad for new profit streams.

Earlier this year, Hana was chasing Saehan Bancorp, a Korean-American bank based in Los Angeles. Hana was supposed to buy a majority 51 percent stake in the company. However, negotiations fell apart at the last minute in April.

Yet Hana expressed its goal to keep seeking a new route into the U.S. The Korean financial group is also looking into reopening the retail operation for Korea Exchange Bank (KEB).

Hana became the majority shareholder of KEB earlier this year. KEB has three local offices but does not provide retail services. This part of its operations was shut down after U.S. private equity fund Lone Star took over the bank in 2003. Hana has its own direct office in New York.