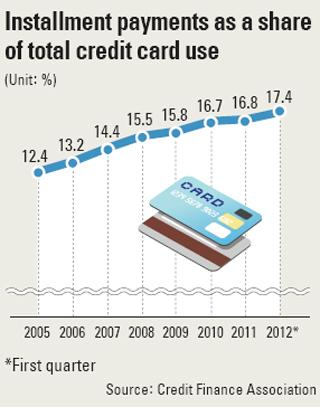 Credit card installment purchases rose to a 15-year high in the first quarter as households tried to reduce their repayment burden in the face of mounting debt, a report showed yesterday.

The report by the Credit Finance Association of Korea showed that 17.4 percent of all card purchases made in the January-March period were installments, the highest reached since 19.2 percent tallied for the whole of 1997, when the country was rocked by the Asian financial crisis.

Reflecting this, credit card firms’ earnings generated by installment fees rose sharply in the three-month period, compared to the year before.

Other credit card companies, such as Lotte Card, also said they made more money through installment fees.

More local households are struggling to make ends meet as their total debt hovers at around 850 trillion won. The situation has been exacerbated by slower economic growth caused by the euro zone woes and problems facing the global economy as a whole. Asia’s fourth-largest economy is expected to grow 3.3 percent this year, down from 3.6 percent last year.

“A rise in installment purchases is a sign of hard times because it shows people are strapped for cash, and can only buy more expensive products by spreading out their repayments over several months,” the association said.

It added that, despite more people buying products in installments, fewer opted to use cash withdrawal services offered by credit card companies.

In the first quarter, the percentage of cash services made up about 14 percent of all transactions using plastic. This is largely because card companies charge a high interest rate of 20 percent for the service.