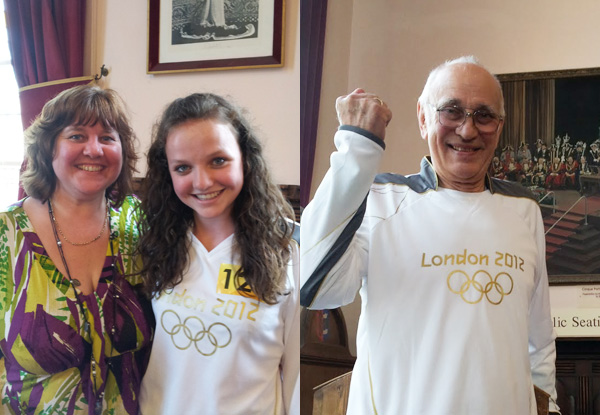 Left: After having a heart transplant, Lana-Emily Foyle, 14, is now raising money for the Evelina Children’s Heart Organization, where she had her treatment. Right: Fellow Olympic torchbearer Paul Cabban, 70, has been battling myeloma, a cancer of the plasma cells, for 12 years. By Chun Su-jin


HASTINGS, the United Kingdom - When the Taliban’s explosives hit the armored vehicle that Martyn Compton was traveling in on Aug. 1, 2006 in Afghanistan, life hung in the balance for the brave British soldier, who is now 28.

His three fellow servicemen were killed instantly. But Compton was luckier, as he emerged from a coma three months later to find his fiancee, Michelle, praying beside his hospital bed. However, he had severe third-degree burns covering 70 percent of his body and face. Doctors were able to rebuild his ears and nose, and his fiancee replenished his will to live. 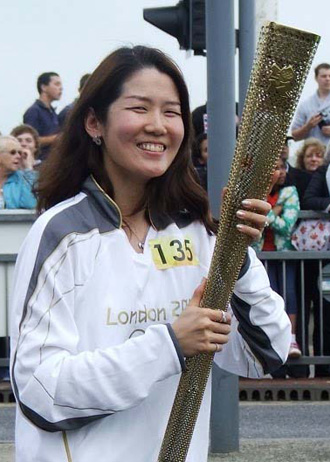 Compton, now happily married with a 9-month-old son, is working as a fundraiser for servicemen and women injured in action. Last Tuesday, at the seaside resort town of Hastings, he got to cherish a special new memory by serving as an Olympic torchbearer for his country.

Compton was nominated as one of 16 torchbearers for this leg of the journey by Hugh Robertson, Britain’s sports minister who was also on-hand to congratulate the brave war veteran. The fellow runners, including this reporter, were humbled by the moving stories of Compton and others like him with equally remarkable tales to tell.

Take, for example, Lana-Emily Foyle, a 14-year-old who has long dreamed of being an Olympic gold medalist.

Bubbly in spirit and positive in attitude, Foyle has a contagious smile and boundless energy, despite having had a heart transplant to fix a hole in her heart. She never gave up, refusing to abandon Olympic dream, and is now raising money for the Evelina Children’s Heart Organization, where she had her treatment. Last Tuesday, after carrying the Olympic flame around Hastings, she ran and hugged her mom who had nominated her.

And let us not forget Paul Cabban, who has been battling myeloma, a cancer of the plasma cells, for 12 years, including having a stem cell transplant. A marathoner, he serves as president of Hastings Runners, where he’s been a member since 1987. Despite his illness, he refused to quit running and has already competed in more than 200 half marathons. Cheered on by his club members last week, the 70-year-old boldly said, “I don’t have time to be old.”

Such against-the-odds stories are humbling, heart-rending and inspiring. This was especially the case for Sarah Hatton, 41 years old, a torchbearer who fought through the tears on the bus to the relay route but kept enough English humor in reserve to keep a smile on everyone’s faces.

“I knew I’d be crying so I wore water-proof mascara,” she said.

Hatton said she felt “humbled” to be participating in the relay, but she equally deserves her place. This iron-willed lady has already lost four stone in her battle against colitis, a digestive disease, and related complications. An aerobics instructor, she inspired her students by continuing to teach five classes a week with a colostomy bag. During her three-year fight against the chronic disease she has stayed the course, and was nominated by her community as a torchbearer.

However, it was perhaps I who should have been most humbled by these fantastically brave people and their never-say-die spirit. As a reporter covering the Olympics, I was nominated by the International Olympic Committee to serve as a torchbearer for London 2012, which officially gets under way on Friday, after the Korean alpine city of Pyeongchang won on its third attempt to host the Winter Games, in 2018.

Oona Murihead, a member of the London 2012 Games’ Organizing Committee, said she received 3,000 applications for 500 torchbearer’s positions in the Sussex area alone. “Every story was so touching that I cried,” said Murihead.

With just days before the Games begin, a festive spirit is gripping many parts of the United Kingdom and torchbearers are making headlines. One proposed to his girlfriend; another was pictured in a wheelchair with his fellow war veterans.

As I was visiting Hastings for the first time, I knew little about the town aside from the famous battle that took place there in 1066 battle, resulting in William the Conqueror’s victory. As a local tour guide put it, Hastings is “the birthplace of England.”

But after running the torch relay, I also know this: It’s a town filled with warmth for strangers. There were hundreds of locals lining the path of the Olympic flame, and they cheered, clapped, and smiled as the flame approached and passed. Some even asked to be photographed with me and the torch.

“Congratulations, you are an Olympian,” said one Hastings local as I jogged by. This cheerful gentleman then headed off with his family to the hustle and bustle of the old town area. When I reflected on this later, it struck me that he had as much claim to the title as I did. We were both bound by the fraternal spirit that the Olympic flame represents.

The flame will reach the Olympic cauldron on Friday in London in time for what will surely be another amazing opening ceremony, ahead of two weeks of touching human drama. With more inspiring stories set to unfold before our eyes, let the Games begin!