To keep tech up, Samsung acquires

To keep tech up, Samsung acquires

Samsung Electronics is buying more companies as part of its growth strategy and its attempt to keep up with technology. 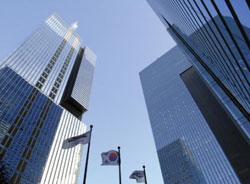 It acquired the mobile-technology business of U.K.-based Cambridge Silicon Radio PLC for $310 million on Tuesday, in its bid to ensure the company’s key manufacturing technology and patents related to mobile devices.

“This acquisitions is the largest of a foreign company since the financial crisis in 1997,” said Woo Nam-sung, president of the Large Scale Integration division at Samsung Electronics. “Samsung is expected to provide a variety of features in handset connectivity.”

The purchase of CSR is the third of its kind for this year, and all are related to smart devices like phones and tablets. The U.S.-based mSpot, which Samsung bought in May, provides online media and cloud-based data storage.

Cloud services for Samsung’s smart appliances such as smart phones, smart TV, computers and electronic devices, will be possible when Samsung applies mSpot’s technology to all of its devices.

In the past, Samsung has had a poor track record in M&As. In February 1995, Samsung acquired the U.S.-based AST Research, the sixth biggest company in the PC industry, for $375 million. But AST lost out to rivals Compaq and Dell, and Samsung withdrew from the U.S. PC market.

Samsung bought so few companies in the past that market analysts thought it was allergic to acquisitions. A change in attitude came after Google took over Motorola last August.

“Power in information technology is rapidly shifting to software technology from hardware manufacturers like Samsung,” said Lee Kun-hee at that time. “Samsung needs to strengthen software competitiveness and M&As, so as to ensure necessary manpower and technology.”

Google has been expanding its businesses through aggressive acquisitions, buying nearly 102 companies from 2001 to 2011.