Weighing the fall of clique of U and Ri

Weighing the fall of clique of U and Ri 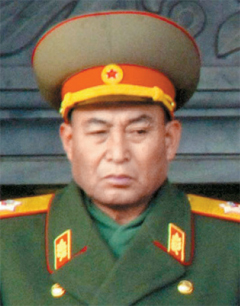 The leaders of North Korea’s Army including then top military commander Ri Yong-ho were alarmed by young ruler Kim Jong-un and the Workers’ Party, sources said, but turned a blind eye.

But that group collapsed July 15 when Ri, the 69-year-old Chief of the General Staff of the Army, was dismissed from all his posts at a meeting held by the party’s political bureau.

The announcement dismissing Ri was as surprising as it was abrupt, since Ri was one of the eight top officials who escorted the funeral coach of deceased leader Kim Jong-il last year, along with Jong-un and his uncle and protector Jang Song-thaek.

Many wonder now what is going on in the power elite in the North. Based on a week-long analysis done by several North Korean experts for the JoongAng Ilbo, one of the central figures in the power struggle in the North is U Tong-chuk, previously first vice director of the Ministry of State Security.

The 69-year-old emerged in September 2009, when Jong-un was officially rising as the next leader of the North, and was also one of the eight that escorted Kim Jong-il’s funeral coach. But U suddenly disappeared from view in April.

“We obtained intelligence early this year that Kim Kyong-hui, Jong-un’s aunt and Jang’s wife, who is also secretary of the Central Committee of the ruling party, was surprised by a secret file managed by U,” said an intelligence source.

The source said that Jong-un and his supporters, including his aunt, must have devised measures to get rid of Ri after getting to know about a threat from U and Ri in the military.

Intelligence sources said that U had already been distrusted by the Kim and Jang couple. At Kim Jong-il’s funeral, U had publicly criticized Jang by sarcastically asking, “Who is he that he’s wearing a military uniform?”

What U said at the funeral was reported to Jang and U went on his blacklist, according to intelligence sources.

“Party members may have criticized Ri as well as U as being traitors,” said one source.

Intelligence sources also noted that the power that led to the dismissal of Ri had been somewhat foreshadowed.

On his grandfather Kim Il Sung’s birthday on April 15, Jong-un emphasized reform in a speech to military officers. He is also known to have said earlier that month to Workers’ Party officials that the ruling party was responsible for the country’s economy and it should maintain control.

“Jong-un and his people must have wanted to give more control to the party instead of the military,” said a South Korean government official.

Kim Yeon-soo, a professor at Korea National Defense University, said, “The Jang and Kim couple and Choe Ryong-hae [director of the General Political Bureau of the National Defense Commission], must have devised a scenario to oust Ri.”

A day after Ri was dismissed, the North’s official Korean Central News Agency reported the promotion of Hyon Yong-chol, who had served in the 8th Division, as vice marshal.

Experts note that Hyon now holds the fifth-highest rank in the North. Considering that Hyon has experience dealing with China, the North may be trying to use him to increase support from China.