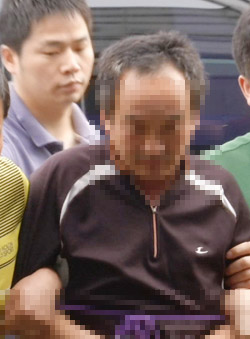 Police located the corpse after a confession by a 43-year-old man surnamed Kim, who was caught by police yesterday morning in Sanyang County. Kim has 12 prior convictions and was sentenced to four years for raping an elderly woman in 2005.

Han had left her home to go to school at 7:30 a.m. last Monday, but never returned.

After receiving a call from her parents, police began their investigation and originally questioned Kim as a reference witness.

Investigators said Kim had claimed he saw the elementary school student on Friday near the bus stop while no one else said they had seen her that day. After his arrest yesterday morning, the 43-year-old admitted to murdering the young girl and said they had known each other for years, police said.

“The girl asked me to give her a ride while I stopped my truck and was working about 60 meters [200 feet] away from the bus stop,” the suspect testified during the probe, according to the police. “I took her to my home and attempted to rape her, but strangled her to death as she resisted strongly.”

Investigators found the girl’s body on a hill in Inpyeong-dong, which is 10 kilometers away from the victim’s home, at 11:30 a.m. yesterday. The girl’s naked body was put in a sack and buried under a bush some 60 meters from the road.

The police said the body showed no signs of rape, but they will run an autopsy today to find the exact cause of death. Investigators said that based on the condition of the body, Han likely died three to four days ago.

Kim was arrested by the police at 9:40 a.m. while he was wandering around a sports center in Sanyang County.

The 43-year-old is currently living with a Vietnamese wife and has a 2-year-old daughter. In 2005, he was imprisoned for four years for raping an elderly woman who was harvesting marsh snails.