A senior judge has been put to shame after he became embroiled in a drunken brawl with three customers at a pub in Yongam-dong, Sangdang District, late on Friday night.

The Cheongnam Police Precinct in Cheongju, North Chungcheong, said yesterday that it booked the 47-year-old judge surnamed Uh from Daejeon District Prosecutors’ Office over the incident. 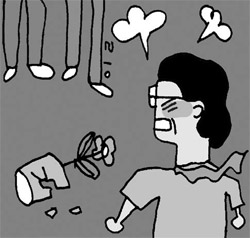 The scuffle allegedly broke out after a partition fell onto a neighboring table. Uh, who was drinking with two friends, apologized to the three men sitting there.

However, tensions flared when the judge’s group accused them of not taking the apology seriously.

The judge reportedly assaulted two of the men, including a 34-year-old surnamed Kim, and damaged property including glasses and chairs. The situation escalated further when the police arrived and Uh hit an officer in the face.

He then ran outside and jumped onto the hood of the bar owner’s car, where he stripped off his shirt and broke the vehicle’s windshield wipers.

“I thought he was a high-ranking official because he was shouting, ‘How dare you! Do you know who I am?’ while he was creating the disturbance,” said the bar owner, also surnamed Kim, during his testimony to the police. “But I never imagined he was an incumbent judge.”

The police arrested Uh at the scene but sent him home after checking his identification.

They booked him later, after interviewing the bar owner and other customers, and are set to question him this week.

The day after the brawl, Uh visited the bar, apologized to the owner and promised to pay for any damage caused.

“The argument occurred when I was discussing my children’s school problems with my friends,” the judge told the JoongAng Ilbo during a phone interview. “I didn’t take off my shirt, though. It was torn to pieces during the scuffle.”

“Uh said he will fully cooperate with the investigation,” said Choi Nu-rim, a judge at Daejeon District Prosecutors’ Office. “We are not considering a personnel reshuffle at this time. But a final decision will come out after we see the results of the police’s investigation.”

Uh is already suspected of having fallen afoul of the law after allegations arose in March last year that he accepted the equivalent of 88 million won ($77,000) in bribes in return for introducing a lawyer to an insurance salesman to help arrange a favorable judgment.

At the time, the police urged the prosecutors to indict Uh on a bribery charge, but he was acquitted. Prosecutors also rejected requests for a warrant to check the salesman’s bank account and Uh’s house.