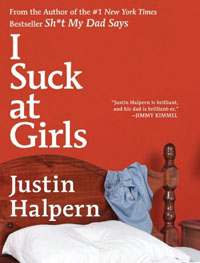 I Suck at Girls

“Human beings fear the unknown. So, whatever’s freaking you out, grab it by the balls and say hello. Then it ain’t the unknown anymore and it ain’t scary. Or I guess it could be a [lot] scarier.”

Fans of the No. 1 bestseller “Sh*t My Dad Says” will recognize the always-patient voice of Justin Halpern’s dad as it crackles through the pages of this hysterical new book. The story begins when Justin takes his dad out to lunch to announce that he’s decided to propose to his girlfriend.

“You’ve been dating her for four years,” his dad replies. “It ain’t like you found a parallel universe.”

But eventually he gives Justin some advice: that he should take a day off and think back over everything he’s learned in life about women, relationships and himself before making his decision. And that’s just what Justin does - revisiting everything from his disastrous childhood crushes to the night he finally lost his virginity while working as a dishwasher at Hooters. 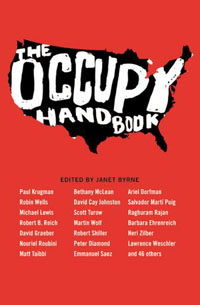 Analyzing the movement’s deep-seated origins in questions that the country has sought too long to ignore, some of the greatest economic minds and most incisive cultural commentators - from Paul Krugman, Robin Wells, Michael Lewis, Robert Reich, Amy Goodman, Barbara Ehrenreich, Gillian Tett, Scott Turow, Bethany McLean, Brandon Adams and Tyler Cowen to prominent labor leaders and young, cutting-edge economists and financial writers whose work is not yet widely known - capture the Occupy Wall Street phenomenon in all its ragged glory, giving readers an on-the-scene feel for the movement as it unfolds while exploring the heady growth of the protests, considering the lasting changes wrought, and recommending reform. A guide to the occupation, “The Occupy Handbook” is a talked-about source for understanding why 1 percent of the people in America take almost a quarter of the nation’s income. 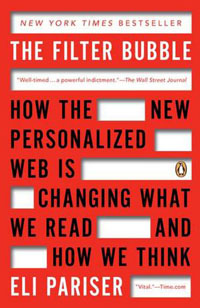 The Filter Bubble: How the New Personalized Web Is Changing What We Read and How We Think

In December 2009, Google began customizing its search results for all users, and we entered a new era of personalization. With little notice or fanfare, our online experience is changing, as the Web sites we visit are increasingly tailoring themselves to us. In this engaging and visionary book, MoveOn.org board president Eli Pariser lays bare the personalization that is already taking place on every major Web site, from Facebook to AOL to ABC News. As Pariser reveals, this new trend is nothing short of an invisible revolution in how we consume information, one that will shape how we learn, what we know and even how our democracy works.