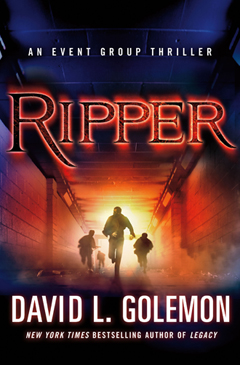 The Event Group is the most top-secret organization in the United States. Only the president is authorized to know of its existence. The group works without oversight and has total autonomy. But in “Ripper,’’ David L. Golemon’s latest thriller to feature the elite team, the Event Group is about to be exposed and destroyed.

A raid on a drug dealer in Mexico unveils a conspiracy going back almost 125 years. It’s a secret so delicate that it’s remained buried since 1888, when a madman was terrorizing London under the name Jack the Ripper. Robert Louis Stevenson tried to reveal the secret to the world, and George S. Patton tried to bury the truth in 1916 when he was a lieutenant working under orders from President Woodrow Wilson. That truth is about to come out and their enemies see this as the perfect opportunity to seize the Event Group’s headquarters and kill every last member of the team.

The Event Group works in a manner similar to the Syfy TV series “Warehouse 13,’’ with historical artifacts kept under lock and key and hidden from the rest of the world. Throw in a mix of Tom Clancy military-style action and “X-Files’’ sci-fi wizardry and the result is an explosive combination that features the author’s immense imagination. It’s difficult to ground such fantastic science and weirdness in reality, but Golemon makes it look effortless.

The last 100 pages of “Ripper’’ are tense, terrifying and worth the investment. Readers not familiar with the Event Group will find this book the perfect place to start. AP