According to a study released by the Board of Audit and Inspection, Shinhan Bank graded loan applicants by education background when setting interest rates. 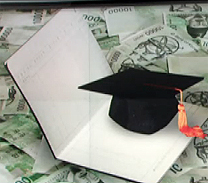 While the lender gave 13 credit points for a high school diploma, it gave 54 to applicants with master’s and doctoral degrees.

Credit ratings issued by banks directly affect whether an applicant gets a loan and what the interest rate will be, the board said.

Of the 151,648 borrowers approved by Shinhan, nearly half paid a total of 1.7 billion won extra because they lacked a college diploma.

The auditing agency said in the report that the Financial Supervisory Service shares the blame for its lax supervision of commercial banks’ lending procedures. Specifically, the agency said that in April 2008, the FSS approved Shinhan’s lending regulation concerning the academic level of applicants.

Shinhan said it changed its credit scoring system in February after a warning from the audit agency.

Private credit rating companies classify a loan recipient as delinquent when payment is not received within five business days of the due date.

Of the 3,649 borrowers in 2010, banks charged up to 3.2 percentage points more in interest to 777 borrowers with a history of short-term delinquencies which resulted in an addition 123 million won annually, it said.