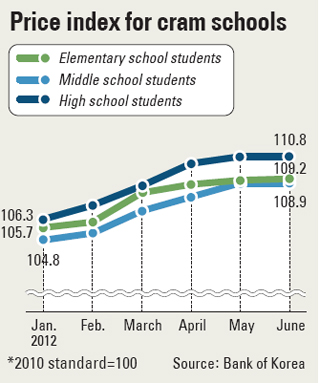 Cash-strapped parents are increasingly using their houses as collateral to secure loans to pay for their children’s education, creating a new class dubbed “edu poor.”

This gap has coined a new term “edu poor,” indicating poor people whose salaries remain low, but who do not intend to sacrifice their kids’ education to beat the financial pinch.

The fact that low-income households are prepared to gamble their homes away shows just how passionately many parents feel in this highly competitive country about giving their kids the best possible leg up the education ladder.

As may be expected, the poor are the biggest victims of rising private tuition fees.

In the first quarter of this year, households in the bottom 20 percent of income earners spent 40,000 won ($34) on average to send their children to cram schools, up 21 percent from the same quarter last year.

This represented faster growth than their monthly incomes, which rose a mere 9.3 percent from 1.1 million won to 1.2 million won in the first quarter of this year from Q1 last year.

Despite the slowdown in inflation, costs for private education are still on the rise.

“Poorer people have a stronger desire to educate their children, to the extent where they are even prepared to skip meals,” said Park Beom-yi, vice chairman of a local parents’ association.

Despite the sacrifices financially strapped parents are prepared to make, however, the gap between the total spending on education by low- and high-income households is so large that children from the former cannot realistically keep pace with those with well-to-do parents.

Households in the top 20 percent of the income bracket spent 668,000 won on average on education in the first three months of this year, 6.8 times more than those in the bottom 20 percent.

Meanwhile, the poor are racking up worryingly high rates of loan delinquency.

According to the central bank, 76.8 percent of low-income earners who took out mortgages have kept up with their repayments in Q1.

“The low-income group is lagging far behind the high-income group in terms of their ability to pay back loans,” said Kim Kun-woo, a researcher at LG Economic Research Institute. “This could lead to more serious problems as incomes are dropping the most among poor households.”