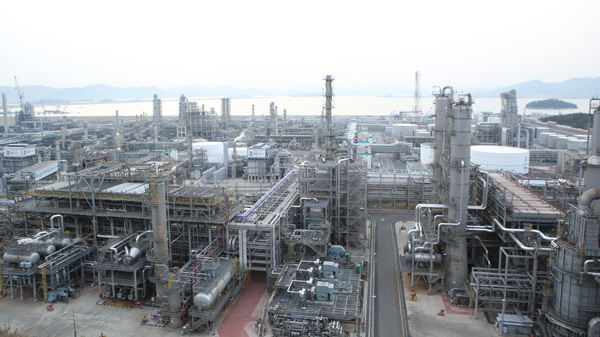 
GS Caltex saw its total exports of petrochemical products surpass the $20 billion mark six months ago, but it expects to post an operating loss for the second quarter of this year as its major revenue-driving business - importing and refining crude oil - has underperformed.

Other refineries, including SK Innovation, Hyundai Oilbank and S-Oil, are facing similar financial straits as global oil prices have dropped for three straight months from April. Crude currently trades at around $100 per barrel. So far this year, it has peaked at $124.22 per barrel in March and hit a trough of $89.15 per barrel in June.

Analysts say the results could be even worse than the oil refineries fear, depending on how the companies have managed to evaluate their inventories.

Each refinery was expected to lose nearly 300 billion won ($261.7 million) in the second quarter due to the falling prices, but the losses are now expected to rise to 500 billion, according to Hwang Gyu-won of TongYang Securities.

“As the oil division takes up most of the companies’ budgets, their overall operating losses are likely to drop further,” he said.

Hwang expects GS Caltex to be the hardest hit as the company evaluated its inventory long before most of the other major oil refineries, meaning it will see the biggest difference in terms of prices.

It takes about 20 days for the unrefined oil to reach Korea from its countries of origin, such as Saudi Arabia, Kuwait and Qatar, then another two weeks for it to be refined into saleable products such as gasoline and diesel.

“This is why the oil refineries have diversified their business projects to petrochemicals and others,” said Park Jae-cheol, an analyst with KB Investment & Securities. “The idea is to make them less susceptible to the oscillations in the price of oil.”

Local oil companies are tightening their wallets to prepare for the expected operating losses. GS Caltex, for the first time in 14 years, is accepting early voluntary retirements. It is preparing to dish out severance payments, some compensation, and the right to operate a GS Caltex-affiliated gas station to those who retire until they turn 60.

Hyundai Oilbank is set to cut its budgets for stationery and other goods by up to 20 percent, while also encouraging its employees to come to work 30 minutes early to maximize efficiency.

Although refineries are battening down the hatches, experts say trends like this are hardly unprecedented. Besides, with the price of Dubai crude hitting $103.38 last Friday, analysts expect them to recover their losses in Q3.

Moreover, as gasoline consumption seems to have been linked to the cold weather, higher demand is expected later in the year, according to analyst Park. 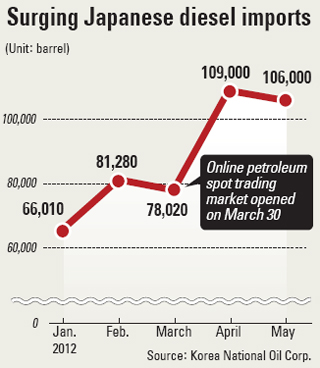 Meanwhile, the volume of refined oil imported from Japan has increased sharply in recent months, after the government opened an online petroleum spot trading market at the end of March. The market was originally set to help lower the price of domestic oil weakening the de facto oligopoly formed by the four local refineries.

However, now industry experts are concerned the market is actually giving wealth to foreign oil providers and hurting local refineries.

According to the Korea National Oil Corporation, Korea imported 109,000 barrels of diesel from Japan in April followed by 106,000 barrels in May. It was the first time for the country to buy over 100,000 barrels from overseas in two consecutive months since 2008.

The government is set to open the door wider for oil imports by lifting tariffs from this month. It also extended trading hours on the online spot trading market by one hour to 5 p.m. yesterday.

“Among neighboring countries in Asia, only Japan can produce refined oil products that fit Korean standards,” said an industry official. “Imports from Japan have traditionally stayed low due to their high prices, but the newly opened online trading market has given them a boost.”

Other analysts say local refineries will not be heavily influenced by the growing reliance on Japanese oil imports.

“Changes to global crude prices, as well as each local refinery’s response to these changes, are much more influential in terms of affecting their performances,” said Hwang of TongYang Securities.

He added that Japanese imports account for 5 percent of the local market, meaning they are too small to pose a serious threat to local refiners’ market shares.