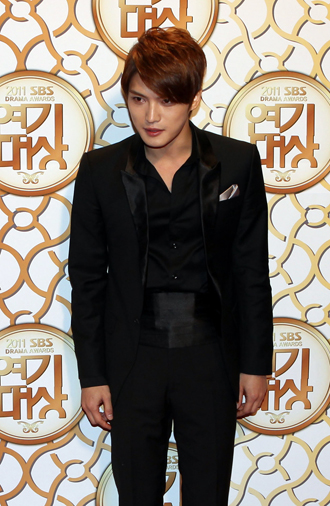 Kim Jae-joong was one busy man on July 22 as he entertained fans all day long. Earlier in the day, Japanese fans flocked to the set of “Time Slip Dr. Jin” to catch glimpses of Kim’s acting.
While there, the fans also treated the cast and crew members to snacks and beverages.

Later in the day, fans relocated to a fan meet which took place at Yonsei University Amphitheater.
At the event, Kim sang the song from the MBC drama in which he is starring before divulging information about filming.
Kim also added a special touch to the program by reciting poetry in Japanese.

This isn’t the first time that Kim has held a solo fan meet.
On May 23, the JYJ member held his very first fan meet in Taiwan, which was attended by more than 2,500 fans.
At the time, he shared about working on the set of last year’s drama “Protect the Boss.”
By Carla Sunwoo [carlasunwoo@joongang.co.kr]