Wiggins rolls to a historic win for Britain at Tour

Wiggins rolls to a historic win for Britain at Tour 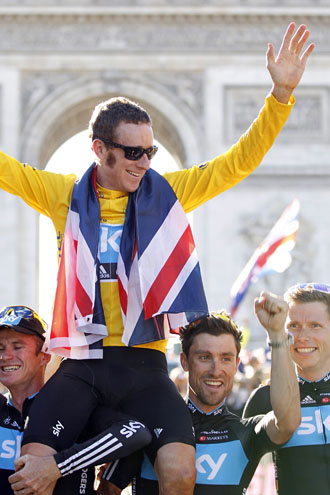 Bradley Wiggins celebrates in front of the Arc de Triomphe in Paris on Sunday after becoming the first Briton to win the Tour de France. [REUTERS/YONHAP]

PARIS - Twenty-three years ago, Bradley Wiggins marveled as Greg LeMond blazed a trail as America’s first Tour de France winner. Now, he has blazed his own.

Wiggins locked up the yellow jersey a day earlier by winning the final time trial, making Sunday’s ride on the Champs-Elysees largely ceremonial.

Putting the coveted shirt to work one last time, he added a touch of class by providing a lead-out to Sky teammate and fellow Briton Mark Cavendish to get his third Tour stage victory - the 23rd of his career - in a sprint.

The Isle of Man native is a main contender to win road-race gold at the Olympics in London.

Wiggins congratulated teammates after crossing the line, hugged his wife, and clutched the hands of their two children. A soprano sang “God Save the Queen’’ and Wiggins thanked the crowd with a touch of British humor.

“Cheers, have a safe journey home, don’t get too drunk,’’ he quipped after hoisting the winner’s bouquet.

“It’s been a magical couple of weeks for the team and for British cycling,’’ Wiggins said. “Some dreams come true.”

This 99th Tour will be remembered for successes of other Britons too, like Christopher Froome, who was second overall, Cavendish and Scottish veteran David Millar, who won seven stages among them - a Tour record for Britain.

It was a race of disappointment for Cadel Evans of Australia, who struggled in the climbs and failed to repeat his 2011 Tour victory. And a swan song for George Hincapie of the United States rode in the last of his record 17 Tours.

Wiggins’ victory was all the more remarkable because it culminated his transformation from three-time Olympic champion on the track to road-race star. His early years had given him the sustained power for the Tour time-trial - which he dominated twice this year - but his ability to scale Alps and Pyrenees ascents was in question. There, too, Wiggins came through.

His victory for Britain was no tiny feat. It’s not just the first British victory, but also the first podium finish since Britons began riding in the race in 1937. A total of 59 have competed since then.

He showed superb form, with three stage-race victories. And this layout was about as favorable as it could come for him: heavy on time-trials, lighter on climbs.

His Sky team was methodical in its march to victory, at times evoking some uncomfortable comparisons with the dominant teams of Lance Armstrong.

The seven-time Tour champion was at times a presence in the background at this race, with news of his battle against U.S. doping charges that threatened his legacy.

This Tour, as in many in recent years, took its licks from doping.

On the first rest day, Remy Di Gregorio of Cofidis was arrested and ousted from the race in a French anti-doping probe.

The bigger bombshell came on the second rest day: Frank Schleck, the RadioShack Nissan Trek leader from Luxembourg, who placed third last year, was ousted after he tested positive for the banned diuretic Xipamide on July 14. He has denied any wrongdoing. AP