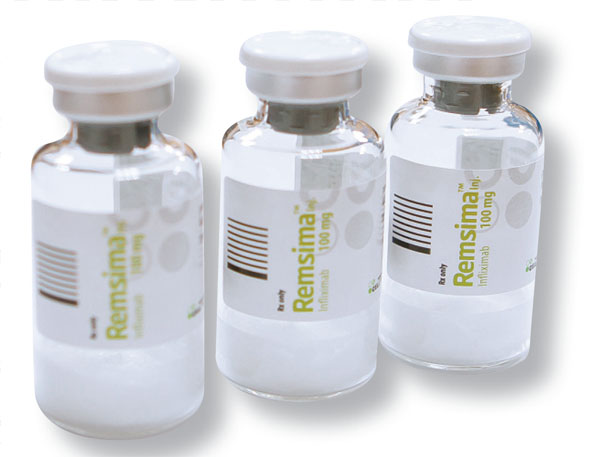 Remsima is a biosimilar version of U.S. Merck’s Remicade. Provided by Celltrion


A local biopharmaceutical company has won approval to produce the world’s first antibody biosimilar, paving the way for it to enter a new market with lucrative potential.

Celltrion announced yesterday that the Korea Food and Drug Administration (KFDA) approved its product Remsima after seven years of clinical tests and development.

Remsima is a biosimilar version of U.S. Merck’s Remicade, a globally renowned medication for rheumatoid arthritis.

Biosimilars are effectively copies of innovative biopharmaceutical products made from substances extracted from the human body, but that show a slight variation from the original. They are distinct from generics, which copy the chemical ingredients of patented drugs.

Global demand for biosimilars is forecast to grow to $31 billion over the next eight years as patents for original biopharmaceutical products are due to expire, according to the U.S. Generic Pharmaceutical Association.

In the case of Remsima, the KFDA has granted approval for the first biosimilar to treat the same diseases that the original drug is used for, such as rheumatoid arthritis and Crohn’s disease, a digestive disorder.

This gives Celltrion a foothold to enter the 28 trillion won ($24 billion) market for TNF-alpha antibody treatments.

The company is expected to be able to monopolize the global market for the next five years as none of its rivals in the United States or Europe have started conducting clinical tests on biosimilars for antibody treatments, it said.

Celltrion is currently awaiting approval of the same product from the European Medicines Agency (EMA). By the end of this year, it hopes to win approval for the drug from around 100 countries.

It is targeting more advanced countries by offering Remsima at a more affordable price than the original from which it draws its inspiration. Moreover, it aims to give patients in developing countries access to the new antibody medication, which is in limited supply in second-and third-world nations.

“Biosimilars offer a ray of hope for patients hit with high medical costs. They herald a landmark change in the global medical market,” said Seo Jung-jin, chairman of Celltrion. “They have fewer side effects and are more efficacious than chemical-based drugs.”

Celltrion plans to launch Remsima in the local market during the current quarter. It has invested 200 billion won since first developing the material for the biosimilar in 2006.