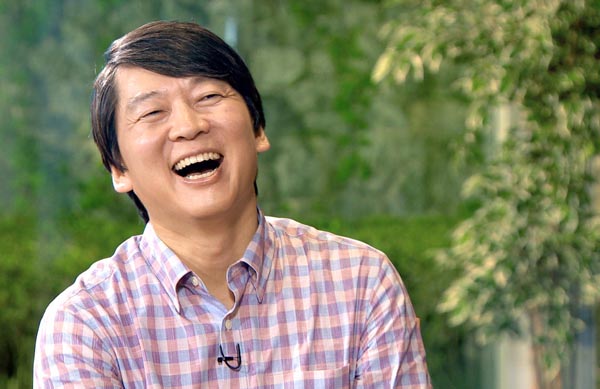 
Ahn Cheol-soo remains elusive as to whether he will run for president in the approaching December election. But if actions speak louder than words, his campaign has already begun.

One week after publishing the book “Ahn Cheol-soo’s Thoughts,” the liberal independent appeared yesterday on “Healing Camp,” a popular SBS talk show where public figures openly discuss personal issues to “heal” their minds. Representative Park Geun-hye, the presidential frontrunner of the ruling Saenuri Party, appeared on the show in January. 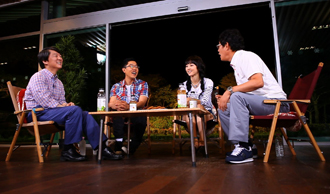 Ahn sat down with the show’s three hosts and openly discussed his life and career. No questions were off the table.

Popular comedian Lee Kyung-kyu directly asked the software mogul-turned-professor whether he will run in the presidential election. Ahn deflected the question with what has become his signature humility, asking, “Do you think I deserve it and am qualified?”

Ahn snatched up valuable air time from declared presidential hopefuls, drawing the ire of candidates from both the ruling and opposition parties. Only two political heavyweights have appeared on the show: Park and Moon Jae-in, a senior adviser of the main opposition Democratic United Party, before declaring his presidential candidacy.

“I did everything I could to appear on the show, but [producers] told me that ‘politicians are not allowed,’?” Kim Moon-soo, the Gyeonggi governor and a presidential candidate of the ruling Saenuri Party, said in a radio interview yesterday.

A close aide to Sohn Hak-kyu, a candidate of the opposition DUP, also complained about the program’s decision.

“It’s obvious that Moon’s approval rating rose after he appeared on the show. The decision is definitely unfair considering that the show is apparently having an impact on the candidates’ approval ratings.”

So far, Ahn hasn’t formally announced his bid for president and has escaped the media’s attention. However, recent moves including publishing his book on Korean politics and economics have raised speculations that he is already campaigning.

Many analysts in the South see publishing a book as a political act during an election year to raise money for a campaign. Moon jae-in, the DUP candidate, also published a book in June last year, titled “Moon Jae-in’s Destiny,” which is about his close relationship with the late President Roh Moo-hyun and his life as a labor activist and lawyer.

Je Jeong-im, a professor at the Semyung University Graduate School of Journalism who interviewed Ahn for the book and edited it, said in a radio interview that Ahn is confident in his life and would not be afraid of a National Assembly evaluation of his candidacy.

“He told me that he made efforts not to live a shameful life, so he is quite confident,” Je said. “He also said that even if his fame is damaged and hurt or as I described in the book, his fame is ‘shot by some bullets,’ he said he could endure it.”

It’s not the first time that Ahn appeared on a major talk show. In 2009, he was a guest on MBC’s “Golden Fishery” as a doctor-turned-businessman.