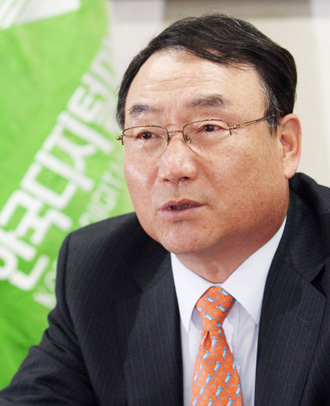 Kim In-kyu, head of the state-run Korea Broadcasting Station (KBS), will visit North Korea for three days from today to grant Pyongyang broadcasting rights for this year’s Summer Olympics in London as the head of the Asia-Pacific Broadcasting Union (ABU).

The ABU delegation, composed of Kim and two non-Koreans, will meet with officials from KRT, North Korea’s state broadcaster, and discuss further ties in technical, content and training programs between the two groups.

“Kim will be visiting the North as the president of the ABU,” said Park Soo-jin, deputy spokeswoman of the South’s Ministry of Unification, yesterday.

“Kim’s visit will be limited to discussing broadcasting issues with the North [and no other inter-Korean relation issues].”

The ABU, which was established in 1964, has 218 members in 60 countries and will be providing the official broadcasting rights for the upcoming London Olympics to more than 40 broadcasters in around 30 countries in the Asia-Pacific region, including North Korea.

The North has sent around 50 players in 11 events, including women’s soccer, marathon, table tennis, wrestling, judo and weight-lifting.

Though the Unification Ministry has denied that any strings are attached to Kim’s visit, there are possibilities being raised that Kim will bring with him a message from South Korean President Lee Myung-bak. He is known to be a close confidant of the president.

Kim was one of President Lee’s former campaign aides during the presidential election. Kim’s visit is the Unification Ministry’s first approval of North Korean travel by a South Korean since a group of people were allowed to enter the country to pay tribute after the death of Kim Jong-il in December of last year.