Watch what you say in the North’s restaurants

Watch what you say in the North’s restaurants 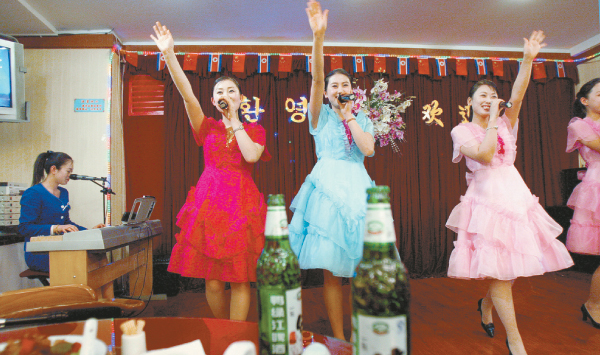 North Korean spies disguised as waitresses perform at a restaurant in Lianioning, northeast China, in 2009, to lure South Korean guests and withdraw classified information on current affairs in the South. [AP/YONHAP]


“Sir, when you are having dinner in this room, please be careful of what you say,” a waitress at a North Korean restaurant in China warned a South Korean businessman.

The two had grown close, as the South Korean often brought his clients to the restaurant to treat them to the cuisine and unique musical performances. But before the young woman returned to the North, she hinted that there was a reason South Korean patrons tended to be seated in the same private room.

“Whenever I visited the North Korean restaurant, I frequently felt that the waitresses were eavesdropping on what we were talking about behind the door,” the businessman told the JoongAng Ilbo. “They only let me in one specific room, even though there were a lot of vacant tables.”

North Korean restaurants have opened throughout Asia, from Siem Reap, Cambodia, to Beijing, becoming unique settings for fraternization between North and South Koreans. Evidence is growing that employees are instructed to report on their encounters with South Korean citizens and use these sites as intelligence gathering proxies.

In Nepal in September 2011, authorities raided a North Korean restaurant named Okryugwan on suspicions of tax evasion. Confiscated materials, however, included suspicious documents including dialogues of customers and personal information of South Korean guests, such as the names of patrons and when they entered.

Some waitresses have offered sexual services to South Korean businessmen from major conglomerates to extract information, another South Korean businessman in China said. “I witnessed that some North Korean restaurants’ waitresses offered sexual services to Southern businessmen working at conglomerates in the South in order to withdraw classified information on the companies,” he said.

The official also expressed concerns that waitresses or managers at North Korean restaurants could attack or abduct South Koreans.

Those waitresses are ordered to report daily on South Korean guests to North Korean authorities, sources said. Surveillance cameras and wiretapping devices are reportedly installed in some rooms.