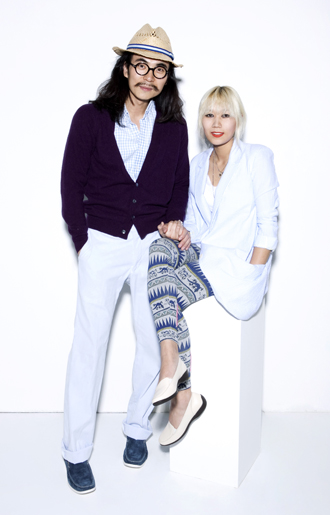 Korean designer duo Jung Hyeok-seo and Pai Seung-yeon, both 35, seem to have it all: a three-story modern showroom in a posh area of Itaewon, companionship and a pack of celebrity friends who love their clothes.

Most of all, they lead the life they dreamed of when they met in college.

They are the faces behind women’s wear label Steve J & Yoni P, one of Seoul’s hottest affordable designer brands.

The fashion label, named after the English names of Jung and Pai, was launched in Britain in 2006 when the two were studying at Central Saint Martins and London College of Fashion.

It was when Korean design and its designers were hardly known on the fashion scene in Britain. However, the two Korean designers were able to distinguish themselves with styles that were based on British tailoring accented with their own unique wit and funk.

For example, Jung and Pai use in-flight sleeping cushions as collars for their travel-themed collection “Fly Me Away.”

Luckily, their whimsy works for people living in the land of Burberry and Vivienne Westwood where classics and punk are well-balanced and accepted.

“We did everything we could do in the beginning,” says Pai. “We’d been to fairs and exhibitions and we sold our own clothes. While we were doing this and that, we got chances for next steps such as hiring a salesperson and then signing up with a sales agency.

“That’s how we’ve been building up this brand so far.”

After gaining popularity and recognition in London, they brought the brand to Seoul three years ago.

Instead of the stable-turned-studio where they used to work in London with a couple of staff members, Jung and Pai now settle down at a decent studio that is located on the third floor of their showroom in Itaewon.

The number of staff members also jumped to 11, but the seemingly perfect duo has a lot of worries these days. They say it is time for them “to think about the next step” and deal with growing pains.


Q. You two seem so perfect. The public loves your clothes and the business is doing well. You can’t ask for more than that.

A. Steve: We’ve been doing well so far, but the biggest challenge for us is developing our brand nationally by opening shops at department stores. Many designers with years of success struggle with the same issue.


Why is it important to open a shop at department stores?

Yoni: There is a certain limit in terms of sales if you sell your clothes at select shops. After all, you have to penetrate into department stores if you want o develop your brand from small to large scale, but nobody made it after Andy & Debb.

Many promising designers [who failed to do this] eventually went to conglomerates.

There is no role model whom we can look up to. So we’re thinking about ways to grow our brand. We want to set a good example to many young designers who will worry about the same issue.

You’ve been chosen as one of “Seoul’s 10 Soul” for two years in a row. To many people who don’t know much about the fashion industry, it seems questionable why the Seoul Metropolitan Government backs up designers like you or established designers with longer careers instead of supporting younger designers. What does the city’s support mean to you?

Steve: It’s not easy at all for designers to expand their business overseas by themselves. You need various distribution channels and it takes time to reach the break-even point.

This year, we applied for showrooms in Paris and London [under the “Seoul’s 10 Soul” project]. We’ll share the showrooms with local designers there.

Yoni: There are designers in “Seoul’s 10 Soul” who have two-decade careers. It means that it is still hard for them to break into foreign markets by themselves. The “Seoul’s 10 Soul” project is practical for us. Without such aid, it is hard.

[“Seoul’s 10 Soul” began three years ago. The project selects designers who are successful in Seoul or have the potential to succeed overseas and supports them financially. The project will continue until 2020.] 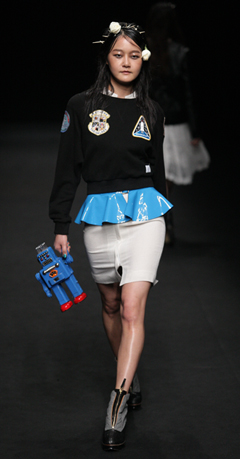 
Why did you launch your brand in London?

Steve: I felt like we were going to stay there forever back then. We learned a lot about the fashion system and we found inspiration.

As the brand developed, however, we realized there is a limit. Manufacturing has almost collapsed there and it was hard to find manufacturers. Only Burberry and Mulberry could thrive there because they have their own manufacturing lines. We saw many successful designers with careers of seven and eight years quit because of it.

So we thought it is ideal to move to Seoul. Seoul still has manufacturing lines and they produce quality clothes. This was around the time when Korean fashion made its name overseas. Looking back, it was the right decision because Korean fashion is well-known these days and people are interested in it.

Your motto is: “Two heads are better than one.” Do you always agree?

Steve: It doesn’t mean that it is always good because we are two. But we have more advantages than single designers. For example, even if one of us is away from the office, the other is able to be in charge of the company.

Yoni: Opposite views make you achieve better results, I believe.

Steve: I think we stimulate each other to become better.

Was it your long-held dream to become a designer duo?

Yoni: We dreamt of becoming designers ever since we were in college [in Seoul]. We even launched our own brand before heading to London. We registered the brand by paying royalties, but it is hard to tell you this brand name because it is unspeakably corny.

You two first met as classmates while you studied fashion design in Seoul. Was it love at first sight?

Yoni: We were close friends from freshmen year, but Steve asked me out when we were sophomores. We were in a lecture. I was sitting in the front and he was sitting in the back. He sent me a note and it read: “What about going to a zoo with me?” That was our first date. I was wearing this leopard print dress. Ever since then, we’ve been together.

Steve: I was worried she might be eaten by all the beasts there.

You and your clothes are often featured in the media. Most recently, Yoni made an appearance on a cable show with your close friend and singer Lee Hyo-ri. Does it make you worried that it might dampen the interest of the media and public in your work?

Steve: That is a topic we always worry about. Sometimes I feel I like to design and make clothes in the studio like artists often do. But I think there are designers with different characters. Some are secretive and it suits their characters. But we are outgoing. In addition to that, there was a time when we needed communication with the public.

Yoni: All labels have their different characteristics. Since our brand is jolly and active, it was better for us to show ourselves instead of keeping a low profile. Anyway, we could promote our brand and it also increased sales. There were more advantages than disadvantages.

It is hard not to mention your signature styles. Jung’s Harry Potter-like glasses and connoisseur mustaches and Pai’s bleached blonde hair and coal-rimmed eyes are the first images most people conjure up when they think of Steve J & Yoni P.

Steve: We tried hard to come up with our own characters while we were staying in London. We didn’t want to feel timid just because we are Asians. Before this, there were many different versions.

Yoni: There are two types of designers. Some just wear white shirts and jeans during the finale, but some are the faces of their brands. I think we belong to the latter.

It must not be easy to create something new over and over again.

Yoni: You never tire of eating meals. After breakfast, you become hungry again and eat lunch. It’s pretty much the same for me. I think of the next collection as I’m working on this collection. It always starts with a question: What do I want to wear for the next season? I’m a muse of my own brand.

What plans do you have for your brand?

Steve: We’ve been growing and growing every quarter. For the next one or two years, I hope to stay focused on what we’re doing now.

Since the brand has become a lot bigger, we’re struggling. While keeping an eye on our business, we’ll wait for an opportunity that will bring us to the next level.