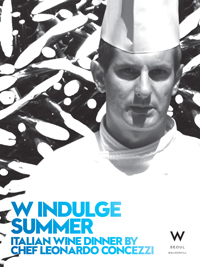 Tomorrow: The hotel is to hold a W Indulge Summer, offering a variety of menus accompanied by wines from the Italian regions of Tuscany, Lombardy and Piedmont. Dishes will be created by Leonardo Concezzi, head chef of the hotel St. Regis Bangkok, along with chefs of the W Seoul-Walkerhill.

The wine list includes a 2011 Michele Chiarlo Gavi Le Marne and a 2010 Tommasi Ripasso Valpolicella Classico Superiore, among others.

This event will be held in the Kitchen on the first floor starting at 7 p.m. and an aperitif reception will be held as well at the Woobar. 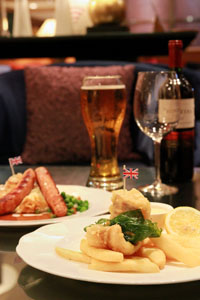 To Aug. 12: To celebrate the Summer Olympic Games, the hotel is presenting a Special Olympic Promotion offering two specials.

First, the Trevi Lounge will serve an Olympic menu with two traditional English snacks of fish and chips (19,000 won) and bangers and mashed potato with onion gravy (23,000 won).Guests can also enjoy unlimited beer or wine for an additional 10,000 won or 12,000 won, respectively.

Starting Friday, all restaurants in the hotel will run an Olympic promotion: customers that leave their business cards will be eligible for drawing to win lodging, buffets or cake certificates. 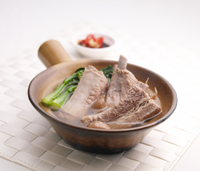 Aug. 1 to Aug. 14: The hotel’s international buffet restaurant, Orangerie, will welcome Chef Hun Pin Cheng, a guest chef from the Grand Copthorne Waterfront Hotel in Singapore, to its kitchen for two weeks during August.

During August: The Seven Square, the hotel’s buffet restaurant, will feature special dishes prepared with rare premium pork “duroc” for the entire month of August. The promotion is a part of the “Special Food for Your Table” series, a yearlong promotion featuring premium food ingredients delivered directly from the producers. The “duroc” menu is being introduced to promote the pork, often called “luxury premium” pork by gourmets.

To Sept. 3: The hotel will have prize drawings for customers of the Chinese restaurant Hong Yuan and buffet restaurant Aria.

Prizes include a trip to Phuket, Thailand, and accommodations at the Westin Chosun Seoul and Busan.

Guests get an entry for the drawing with each restaurant visit. Drawings will take place on Aug. 3 and Sept. 3.

Winners will be contacted individually and announced on the hotel’s Web site.

A total of 20 people will receive prizes.