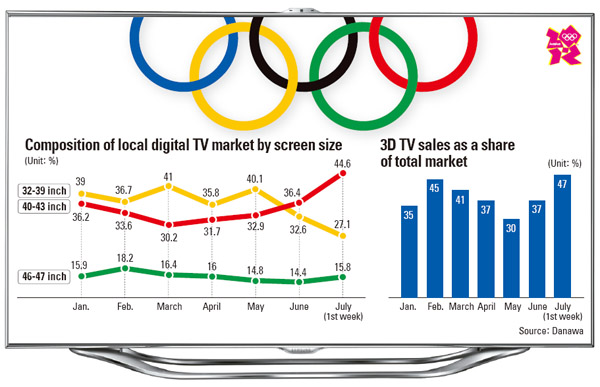 Premium digital TVs have been flying off the shelves of Korean stores for the past month and the London Olympics are seen as a driving force.

TV sales often surge ahead of major international sporting events, such as the FIFA World Cup and Summer Games, and this is especially true this year as the two tech giants have been dovetailing their marketing strategies to piggyback on the popularity of the quadrennial event, which officially begins Friday.

Sales of digital TVs between 40 and 43 inches accounted for 44.6 percent of all TV sales in the country for the first week of this month, compared to just 36.4 percent last month.

The upswing was the biggest monthly gain posted this year.

Meanwhile, LED TVs accounted for 45.9 percent of all TVs sold in Korea in January, but a whopping 80 percent in the first week of this month due to falling unit costs and strong consumer appetite.

“TV makers seem to be pushing for aggressive marketing, targeting consumers who wish to enjoy the Summer Olympics on a large-screen TV.

“Consumers who were interested in purchasing TVs tend to advance the buying time to watch the Games” said Jang Sung-won, a senior researcher at Samsung Economics Research Institute(SERI).

As such, retailers have been accelerating their marketing activities related to the Olympics by focusing on sports stars such as figure skater Kim Yu-na, reigning swimming gold medalist Park Tae-hwan and gymnast Sohn Yeon-jae in their advertisements.

All three are Olympians, with the latter two due to compete at London 2012, which kicks off on Friday.

“In the U.K., all broadcasters have switched to digital, so high-definition TVs are now in great demand here,” said Jang Myoung-chul, a market researcher at the Korea Business Center (KBC) in London.

This serves as an overseas branch office of the Seoul-based Korea Trade-Investment Promotion Agency (Kotra).

LG has also stepped up its marketing activities by offering a maximum of 1 million won ($871) in the form of cash back to people who buy one of its Cinema 3-D TVs during the two-week-long London Games.

Meanwhile, Samsung showed off its SBS London Olympics application for its connected Smart HD TVs, giving users access to daily updates on the main events and a real-time medal count in 3-D. Domestic broadcaster SBS owns the Olympic TV broadcasting rights from 2010 to 2016.

Neither LG nor Samsung have said when they will release their respective 55-inch OLED TVs, which were expected to be available before the start of the Olympics later this week.