Steelmakers fear Q2 may be a blip

Steelmakers fear Q2 may be a blip 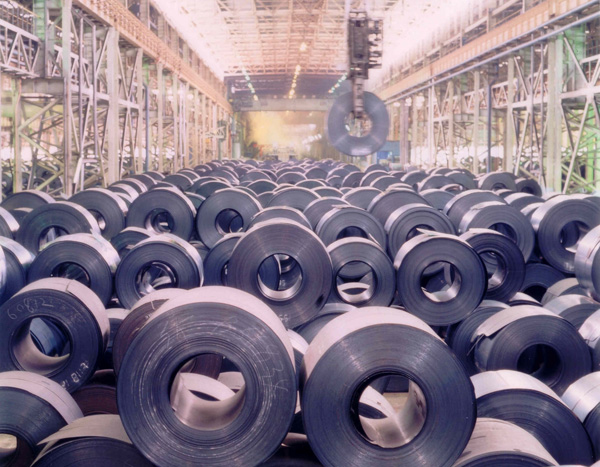 Hot-rolled steel coils are stacked in rows at Posco’s steelworks in Pohang, North Gyeongsang. Provided by the company

Local steelmakers are breathing a collective sigh of relief as they look forward to higher earnings in the second quarter owing to clipped raw material costs.

However, anxiety about what lies in store in the latter half of 2012 runs deep as demand for steel is expected to remain flat amid a protracted global slowdown. 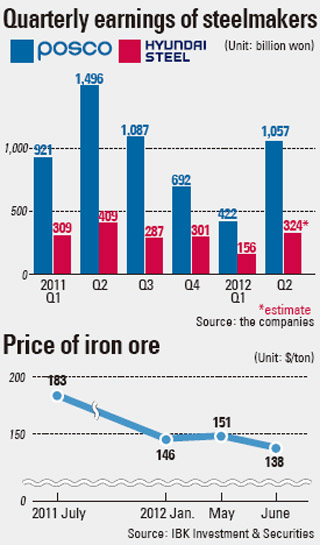 “Of its 70 subsidiaries, the group plans to sell off at least 10 that are losing money by the end of the year,” said Lee Young-hoon, senior vice president and head of strategy at Posco. Some of Daewoo International’s subsidiaries are believed to be included on the list.

Posco will also restructure the remaining subsidiaries. Posco Engineering, Posco Plantec and Sungjin Geotect are expected to be merged into a bigger plant engineering unit.

The world’s No. 3 steel manufacturer by output attributed the improved performance to drops in import prices of raw materials over the last three months. International iron ore soared to $151 per ton until April due to speculative investment from China, but the price is retreating to levels considered more stable as the industry remains in a funk.

Posco renegotiated the import price of iron ore in June to cut costs.

According to an employee from the company, global steelmakers have been discussing ditching the quarterly contract system for iron ore and opting instead for year-long agreements as it is projected to see further price drops.

“Raw material suppliers may want to have an annual contract because prices continue to drop, but for Posco, either quarterly or annual contracts are fine for now,” the employee said.

“Hyundai Hysco is probably the most stable company among steel manufacturers, because it has a very secure client in Hyundai Motor,” said Park Hyun-wook, an analyst at HMC Investment & Securities.

Hyundai Steel, the automotive group’s hot-rolled steel manufacturer, is slated to announce its Q2 earnings on Friday. It is forecast to see operating profits grow to about 324 billion won, representing on-quarter growth of 107 percent, according to Daishin Securities.

The company has been enjoying robust sales of section-shaped steel, or H-steel. It started raising the products’ export prices in April.

Steelmakers endured one of their rockiest periods in recent history in the first half of this year, and the next six months seem to offer little in the way of respite as global demand for steel products is forecast to remain flat.

One major cause is the slowdown in China, which accounts for 45 percent of global steel consumption. Analysts like Jeon Seung-hoon at KDB Daewoo Securities forecast no further growth in terms of demand or investment in the industry in China.

Beijing’s recent announcement that it will curb real estate prices looks like another roadblock hampering the recovery of demand this year, analysts say.

“It’s not easy for Chinese steel manufacturers to slash production, even though local steel prices have gone down and demand is not growing, because 90 percent of steel mills have furnaces that are difficult to idle once started,” HMC’s Park said.

A bigger concern is the steel supply glut, which means inventories need to be sold as demand remains weak.

“The steel industry has increased its production capacity for two years, but now steel mills are operating at 90 percent on average,” said Park Byung-chil, an analyst at IBK Investment & Securities. “As a result, steel producers had 4.52 million tons of inventory in May, up 19.1 percent from the same month last year.”

The fiscal crisis in the euro zone could exacerbate the problem of oversupply as it has already dealt a blow to Korean exports, especially in the shipbuilding industry.

“As liquidity has frozen up in the European shipping industry, ship orders were slashed by 65 percent in the first half,” Park said.