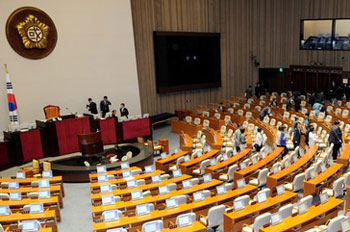 Despite the dominant presence of the conservative political parties in the legislature, the 19th National Assembly is far more liberal than its predecessor, an in-depth survey of the lawmakers showed.

According to a survey jointly conducted by the JoongAng Ilbo and the Korean Association of Party Studies, 36.6 percent of the lawmakers elected in the April legislative elections were on the liberal side of the ideological spectrum, up from 19.1 percent in a similar survey for the 18th National Assembly.

The poll showed that 30.8 percent of the incumbent lawmakers were conservative, down from 42.3 percent in the previous survey.

Taking place from last month until July 5, the survey asked lawmakers questions on 15 key policy issues and placed them on an ideological spectrum. Of the Assembly’s 300 lawmakers, 224 were surveyed. An index was created to score their policies on a 0 to 10 scale, where 0 means the most liberal, 10 the most conservative and 4 to 6 centrist.

The Saenuri Party recorded a 5.9 in the ideology index, shifting toward the center compared to results of the 18th National Assembly. Four years ago, the Saenuri Party scored a 6.2.

The Democratic United Party leaned further to the left, recording a 2.7. In the 18th National Assembly, the DUP was scored a 3.8.

“It allows us to predict that negotiations and compromises won’t be easy between the two major parties,” said Ka Sang-joon, a political science professor of Dankook University.

The disparity in the current legislature is the greatest since the first survey conducted in 2000 for the members of the 16th National Assembly. In the past three surveys, the gap between the two major parties measured within 2 points, but it grew to 3.2 because of the radical left turn of the Democrats during the Lee Myung-bak administration.

Results also show that the DUP has became more ideologically homogeneous with nine out of 10 lawmakers scoring as leftists. Only seven were identified as centrists.

The Saenuri Party showed a mixture of centrists and conservatives. Of its lawmakers, about half were identified as centrists, scoring between 4 and 6, while the rest scored over 6.

Floor leaders of the two major parties showed even greater ideological disparity. Representative Lee Hahn-koo, the Saenuri Party’s floor leader, was registered 7.3 on the ideological index, far on the right compared to the party’s 5.9 average. In contrast, Representative Park Jie-won of the DUP scored a 1.8.

While the overall disparity grew between the two parties, their differences narrowed on economic policies as the Saenuri Party has shifted left on these issues.

Seven out of 10 lawmakers said welfare budgets should be increased taking into account the current economic position. Nearly 66 percent of the lawmakers said regulations on conglomerates should be strengthened for economic democratization.

On the sidelines of the lawmakers’ survey, a similar poll was also conducted with 1,000 people to measure the ideological spectrum of the public. While the lawmakers were leaning left, the public moved slightly to the right with a 5.8 average.

The 19th National Assembly began its four-year term in May, and the conservative ruling Saenuri Party currently occupies 149 seats in the 300-member legislature, while the conservative minority Forward Unification Party has five lawmakers. The liberal Democratic United Party currently has 127 lawmakers and the leftist Unified Progressive Party has 13, while five lawmakers have no party affiliation.