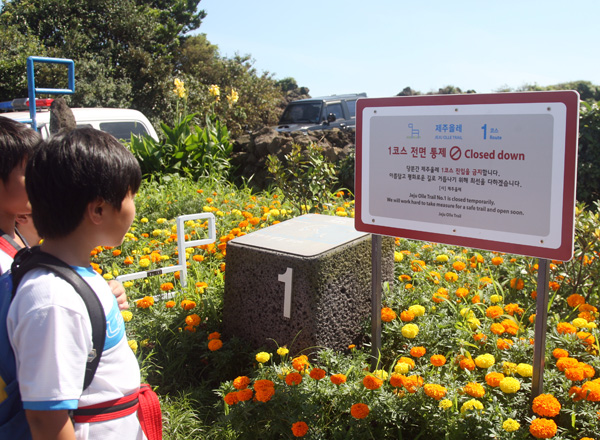 At the entrance of the No. 1 trail that connects Siheug Elementary School and Gwangchigi Beach on Jeju Island, a sign is set up yesterday to inform trekkers that the course will be temporarily closed down following the brutal murder of a 39-year-old visitor. [YONHAP]


JEJU - Jeju Olle, the organization that manages the popular 430-kilometer-long (267.2-mile-long) hiking course, said yesterday that it will temporarily close the No. 1 trail that connects Siheug Elementary School and Gwangchigi Beach following the brutal murder of a 39-year-old visitor.

The number of visitors at the popular vacation destination is expected to drop, leaving many concerned that Jeju may see a dramatic decline in travelers during the peak summer vacation season.

“We decided to close the No. 1 trail to fully cooperate with the police investigation,” Jeju Olle said through its official Web site yesterday. “We sincerely apologize to all tourists who love the Olle and promise to come back with improved crime prevention so women and children can enjoy the beautiful nature of Jeju again.”

On Monday, the Dongbu Police Precinct in Jeju arrested a 46-year-old man surnamed Kang at 6:10 a.m. for kidnapping and killing a 39-year-old female tourist. The suspect denied the allegations but in the evening confessed that he had killed the woman and buried her under a bamboo grove in Seongsan.

The body was found at around 6:30 p.m. The victim went missing on July 12 when she went out for a hike along the No. 1 Jeju Olle trail.

The area near Siheung Elementary School in Seongsan Township in Jeju is the starting point of the No. 1 trail and usually gets crowded every day after 9 a.m. with hundreds of tourists.

But at 10 a.m. on Monday, a day before the course was closed, less than a dozen tourists were seen.

“It seems like people are no longer visiting the Olle trail,” a 37-year-old Seongsan resident running a convenience store told the JoongAng Ilbo. “I think people are shocked that such a brutal murder happened in a peaceful place like Olle.”

Min Hak-il, who runs a guesthouse near the Olle trail, told the Korea JoongAng Daily that he is worried about the level of visitors for the rest of the summer.

“We expected to have more visitors from next month after the Yeosu Expo is finished,” Min said. “But we worry that Jeju will have less visitors during the summer vacation season because of the murder case. About six of the 17 teams that booked for the next two to three weeks canceled their reservations already even though the suspect has been arrested.”

In the probe conducted yesterday, the suspect testified that he had killed the victim because he was angry that she mistook him as a molester. Kang said that the two bumped into each other while Kang was urinating.

The police, however, said the suspect has lost credibility as his story keeps changing.

Earlier in the investigation, the right hand of the victim was found at a bus stop 11 miles from the course. Kang told police on Monday that he brought the hand there in order to obstruct the police investigation and wanted to give a part of the victim’s body back to her family.