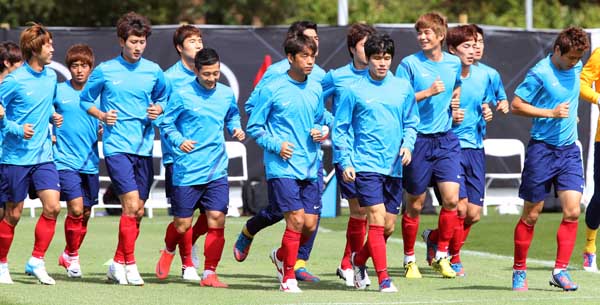 
Coach Hong Myung-bo’s U-23 squad hasn’t lost in 17 games. But the impressive run won’t mean a thing if Korea fails to emerge from Group B in the Olympic football competition.

The battle for gold begins tonight when the young Taegeuk Warriors face Mexico at St. James’ Park in Newcastle at 10:30 p.m. Korea Standard Time.
The first test may be their biggest as El Tricolor won all five preliminary Olympic matches in the Northern and Central American region in March in addition to taking the U-23 International Championship in Toulon, France, in May. 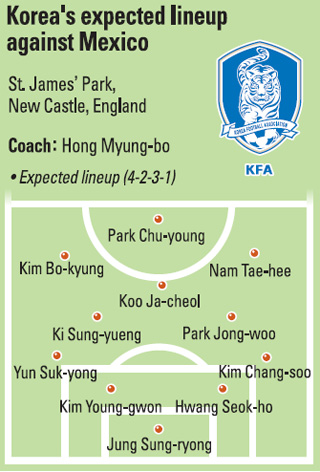 Korea will then play Switzerland at 1:15 a.m. early Monday morning and finally Gabon at 1 a.m. on Aug. 2. The top two teams from Group B will advance to the knockout phase.

The result of the Korea-Mexico bout, which kicks off Group B competition, will be closely watched as the group’s four teams are relatively equal in talent. Analysts say goal differential will be especially crucial in determining the winner of Group B.

At the 2000 Sydney Olympics, Korea was sent home from the group stage despite two victories because its 3-0 loss in its first game against Spain kept it behind Chile and Spain in goal differential.

After losing to Paraguay in the first knockout game in the 2004 Athens Olympics, Korea went on to fare worse in the Beijing Games, failing to advance from the group stage after a 3-0 loss to Italy and a 1-1 tie with Cameroon.

But the 2012 squad is seen as one of the strongest Korea has had entering the Olympics. Four of the players have experienced the FIFA World Cup including striker Park Chu-young of Arsenal; goalie Jung Sung-ryong; and midfielders Ki Sung-yueng of Celtic and Kim Bo-kyung of Cerezo Osaka. A total of 10 players are playing in foreign leagues including four in Europe. Mexico has also cooled off recently, losing two straight against Japan (2-1) and Spain (1-0).

Coach Hong, who was captain of the 2002 Hiddink squad that shocked the world in the FIFA World Cup, has said the Mexico match will be among the most significant games for his team and anything but a win would be disappointing.

“We need to get the first match,” Hong told reporters as he trained with the team before the Mexico match. “Players need to be aware of the significance of the first match against Mexico.”

The Korean Olympic team looks to bring home a medal of any color from London, something that the country has never gotten close to in its 64-year Olympic history.

Team work still remains a question. Key players on the back line were excluded from the team at the last minute or sent home due to injuries. Midfielder Han Kook-young, playing for Japanese football club Shonan Bellmare, was replaced after a fracture on his left foot was discovered on Tuesday. Jung Woo-young, another J-Leaguer from Kyoto Sanga, was urgently called in to replace him.

“It is very unfortunate because there is little time left to prepare a new player for such a big tournament,” Hong said at a media briefing yesterday.

Korea has had three Olympic matches versus Mexico so far and is leading with two victories and one draw. Its main offensive force will come from Park, who scored in tuneup matches against New Zealand and Senegal. Team’s captain Koo Ja-cheol, a midfielder who has played under coach Hong since 2009, is also to play a critical role for the team.

Bleacher Report, a U.S. sports Web site, said on Tuesday the winner of the Korea-Mexico match will finish first in the Group B, and predicted it to be Mexico with a 3-1 win over Korea.