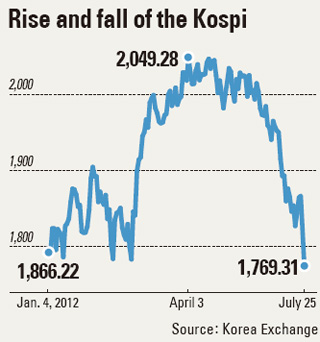 The fiscal crisis in the euro zone dealt a hammer blow to the local stock market yesterday by providing enough momentum to sink the benchmark Kospi to a yearly low as panicking investors jettisoned their shares.

The Kospi plunged 24.62 points to finish at 1,769.31, its lowest close in seven months and a drop of 1.37 percent from the previous day. It dropped as low as 1758.99 early in the morning but rebounded slightly after institutional investors began snapping up bargains.

The bailout request by Valencia spread fear that other regional Spanish governments may follow suit, causing the yield on the country’s 10-year government bond to climb to a new high to 7.6 percent on Tuesday (Central European Time). Yields on Spain’s five-year government bonds rose to an even higher rate for the first time since June 2001.

“The European Central Bank [ECB] needs to intervene,” said Jeon Ji-won, an analyst at Kiwoom Securities. “The narrowing gap between Spain’s short- and long-term bond yields signals a further slowdown in the global economy. A higher yield on the former would suggest Spain is unable to repay the principal, and would struggle to raise funds.”

Greece, Ireland and Portugal have all seen this happen, he added.

“In November, when the yield on Italy’s short-term bonds climbed above the yield on its long-term bonds, it sent the global financial market into a spin,” Jeong said. “The market eventually cooled down after the ECB rolled out a longer-term refinancing program.”