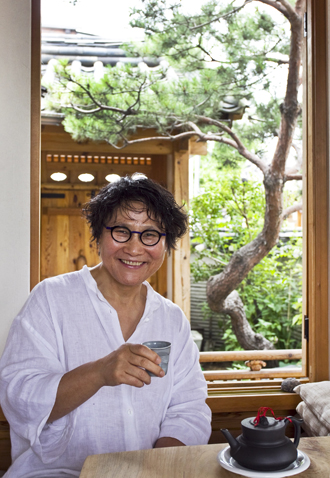 Kim Hong-nam believes cultural heritage sites shine when they remain connected to modern life - that is what prompted her to become head of the National Trust of Korea when it was established in 2002.

Q. What is the primary mission of the National Trust of Korea?

A. That would be saving places where the presence of people can still be felt.

For a long time, Korea focused only on culture for exhibition - museums and artificial folk villages. They may please the eye, but they don’t move people’s hearts. Preserving the daily lives of people where they lived has a meaning that’s different from museum exhibitions.

Think about it - if there was a village, there must have been Confucian temples and schools. There also must have been gut [a traditional rite of shamanism] and other rituals. We want to help people remember and cherish these facets of everyday life.

We also try to stay away from excessive promotion solely for tourism. Oftentimes that comes with commercialism and causes damage. Insa-dong is such a case. Bukchon is also on the verge. We have raised the issue to policy makers several times, but they don’t seem to understand the seriousness of the problem.

What is the most difficult task for the foundation?

And to secure the site, you need money. And that’s the difficult part. When we talk about saving cultural heritages, people often think “people come first.”

Most of the funds we get are for certain projects, not continuing costs like hiring staff and managing the facilities.

When we bought the house of Choi Sunu, we bought the structure with the help of a benefactor in the real estate industry. But for restoration, we called in all the help we could get. Pots from pot collectors, electronic devices from an official at an electronics firm and so on.

For 10 years, our foundation had no vehicle. Only last year, through the help of a benefactor, were we able to purchase an SUV.


Do you feel that there has been progress over the years?

Quite a lot, although it is still slower than the speed at which heritage sites are being demolished.

For instance, the Seoul Metropolitan Government recently got a separate division to focus on the preservation of hanok [traditional houses]. The Jongno District Office got a team dedicated to the Bukchon area.

Some people say the work of the National Trust of Korea is for wealthy people only. How would you respond to that?

It is true that we carry out our major projects with the help of wealthy people. But we cover other costs with citizens’ membership fees. In that sense, you could say we lay the groundwork with the support of our members.

In the case of undeveloped properties, like farmland, whose sale or development occurs at a slower pace than that of buildings, a comparatively small amount of money can be enough.

That is not the case with buildings. It takes a significant amount of money to buy, for instance, the house of Choi Sunu. Oftentimes, properties are pricey and their situations are volatile, like they are on the verge of being sold or demolished, and decisions have to be made fast.

That is why we would like to see more culturally significant properties donated.