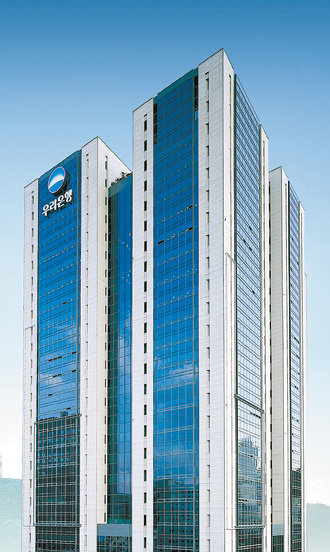 The government’s desire to sell off Woori Financial Group is likely to go up in smoke once more as KB Financial Group, the likeliest contender to snap it up, is said to have lost interest just days before the bid begins.

With presidential elections coming in December, this is the last chance for the incumbent Lee Myung-bak administration to recover the public funds that were injected into the financial mammoth more than a decade ago.

This is the third attempt by the government to sell off its 57 percent stake since the financial group was first put up for sale in 2010.

KB Financial Group’s board members, including its Chairman Euh Yoon-dae and KB Kookmin Bank President Min Byung-duk, met yesterday to discuss whether they plan to take part in the bid, which is scheduled for tomorrow.

Although the second-largest financial group by assets did not confirm its final decision, it hinted that the possibility of it participating is low.

“What I understand is that the decision was made roughly 20 minutes into the meeting,” said a KB employee. “However, despite speculation to the contrary, there was no heated debate.”

Earlier this year, Euh was insistent that KB stood to gain little from taking over Woori as the two financial groups operate in overlapping business areas.

He said he was more interested in seeking M&As in other financial areas where KB is weak, such as insurance or asset management.

But Euh has shown a change of heart in recent months, saying he was warming to the idea of acquiring Woori if conditions proved favorable, such as in the event of the bank’s share value improving.

Even Financial Services Commission Chairman Kim Seok-dong has repeatedly hinted that an unnamed party was interested in taking over Woori.

Kim has been strongly pushing the sale of Woori.

Now, many market observers are wondering what prompted Euh to change his mind again, with some seeing political motivations at play.

Ruling Saenuri Party’s interim leader Park Geun-hye, a presidential front-runner, recently said that next administration should shoulder the burden of privatizing the financial group rather than hastily rushing a deal through before December.

“Who would pursue such a bold sale when it’s clear that the political community is so strongly opposing it,” said a financial industry official speaking on the condition of anonymity.

The strong disapproval of financial companies’ labor unions also seems to have affected yesterday’s decision. The unions have been fighting against the marriage of the two financial groups, which would create Korea’s first megabank with combined assets in excess of 700 trillion won ($608.1 billion).

In the first sale attempt Hana Financial Group showed its interest but backed out at the last moment and swapped it for Korea Exchange Bank, which it finalized the deal earlier this year. In the second attempt three private equity funds including MBK Partners submitted their bid but the deal failed to follow through.