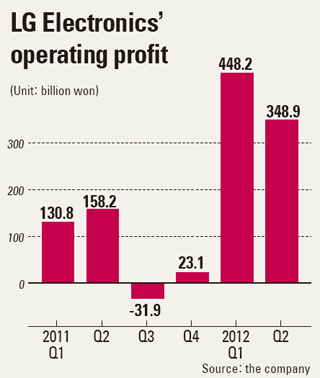 LG Electronics said yesterday its operating profit surged 120 percent in the second quarter from a year earlier to 348.9 billion won ($303 million) on the back of robust global sales of 3-D smart TVs.

Sales during the three months ending June 30 fell 10.6 percent on-year to 12.86 trillion won, but edged up 5 percent from the preceding quarter.

“Although operating profit fell on-quarter, it jumped an impressive 120 percent on-year despite increased marketing expenditure originating from the launch of new products and the weak Korean won,” said CFO David Jung at an investor relations session yesterday in western Seoul.

Despite slow growth in the global TV market, pulled down by poor economic conditions in developed countries, LG’s shipments of LCD TVs in Q2 climbed 5 percent from the same period a year earlier, according to LG.

The firm sold about 5.8 million LCD TVs during the three months, short of an earlier forecast of 6.2 million, according to an estimate by Tong Yang Securities.

However, its mobile communications sector, which includes handsets, swung into red in the April-June period. The Q2 operating loss at the sector amounted to 56.7 billion won, compared with a profit of 38.9 billion won in the first quarter.

Increased spending on marketing in the second quarter, when LG unleashed new smartphones such as its Optimus LTE 2 and L-Style, ate into its profitability, said CFO Jung.

The nation’s No. 2 handset producer behind Samsung Electronics and the world’s fourth-largest player, LG was overtaken by Apple in global sales last year. LG sold 13.1 million handsets in Q2, down 4 percent from the previous three months.

However, its smartphone sales jumped 18 percent on-quarter to 5.8 million units, a quarterly record and something of a silver lining.

Shipments of smartphones that can connect to the latest long-term evolution (LTE) networks also soared 44 percent on-quarter to 1.65 million units, accounting for 28 percent of all LG smartphones. Analysts say LG’s LTE-enabled smartphone sales in the second half will be crucial to ward off losses.