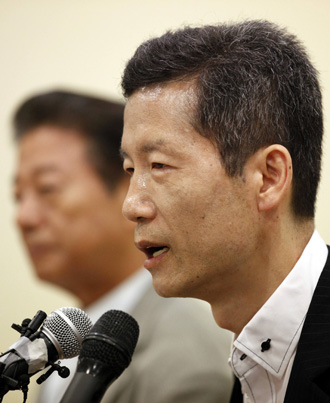 Kim Young-hwan, a pro-North Korean activist-turned-champion of human rights for North Koreans, speaks at a news conference yesterday about his captivity in China. [REUTERS/YONHAP]

Kim Young-hwan, one of four human rights advocates released last Friday after being held in China for 114 days, said yesterday he was treated harshly by Chinese authorities in detention.

The 49-year-old, however, did not elaborate.

“There were two things the Chinese authorities requested me to promise in return for our release,” Kim said at a press conference held in central Seoul yesterday.

“One was for me to admit that I violated Chinese law,” he said, “and the second was to never mention a thing about the cruel treatment I received from state security.”

Kim doesn’t think he made the promises and sees no reason to keep them.

“The authorities continuously pushed me to make the two promises,” he said. “But based on my study of Chinese law [while in prison], I was able to assure myself that I did not violate Chinese law [and endanger state security, as the activists were accused of].”

Kim did not detail bad treatments, but admitted there was physical pressure and that sometimes he wasn’t allowed to sleep.

A senior official at South Korea’s Ministry of Foreign Affairs and Trade said yesterday that when a consul met Kim for a second interview in June, the consul was told about the maltreatment.

After being aware of it, the South Korean government requested the Chinese government to verify details on what really happened.

“We’re still waiting for a response from the Chinese side,” the official told reporters.

Kim is a researcher for the Seoul-based civic group Network for North Korean Democracy and Human Rights. He was a leading propagator of North Korea’s juche, or self-reliance, philosophy and anti-U.S. sentiment in the South in the 1980s and ’90s but he later renounced his pro-North Korean views and became a human rights activist against the communist regime.

At the press conference, Kim also elaborated on how he was arrested in March.

“I arrived in Beijing on March 23 and moved to Dalian on March 27 and met with my colleagues [who are also activists],” he said.

Kim said that on the morning of March 29, he left his hotel and shared a taxi with another passenger. After around 10 minutes of driving, the other passenger got out of the car and the taxi was surrounded by Chinese security agents, who arrested him.

He said the other three South Korean activists were arrested around the same time but at different locations.

“On the day of the arrest, I was questioned at a hotel in Dalian and taken to Dandong and received additional questioning by security officials until April 28,” he said.

“I’m really not sure why we were all arrested because the Chinese authorities didn’t inform us the specific reasons,” Kim said.

“But I’m sure that the North’s political security department was behind [the arrest],” he said.