Strange place for a nap

Strange place for a nap 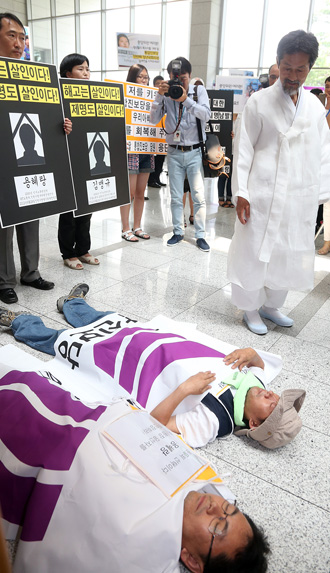 Former members of the Unified Progressive Party, Yong Hye-rang, bottom, and Kim Maeng-gyu, lie on the floor of the Kim Koo Museum and Library, central Seoul, yesterday, where the party’s Central Steering Committee held a conference. The UPP Chairman Kang Ki-kab, in white, looks on. The party members discussed various issues, including revising the party’s internal rules and whether to expel the two incumbent lawmakers, Lee Seok-gi and Kim Jae-yeon, who refused to forfeit their positions and take responsibility for the primary rigging scandal. The protesters demanded the withdrawal of the previous ruling of the party’s disciplinary committee to expel Lee and Kim. [NEWSIS]