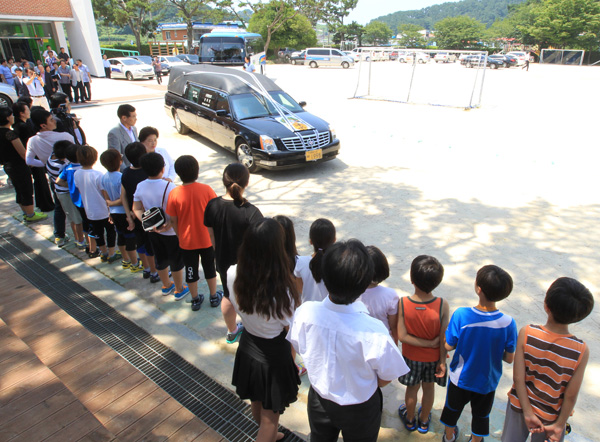 During the funeral of the 9-year-old murder victim in Tongyeong, the hearse makes a final visit to her school before heading to a crematorium yesterday. Han Ah-reum was killed by a neighbor after his failed attempt to rape her. [YONHAP]


TONGYEONG, South Gyeongsang - Yesterday afternoon at a crematorium in Jeongryang-dong, Tongyeong, South Gyeongsang, the father of 9-year-old Han Ah-reum held her coffin and wept bitterly. His daughter was kidnapped and murdered by 43-year-old neighbor Kim Jeom-deok.

“Oh my poor daughter,” the father cried. “I’m so sorry ... it’s all my fault ... I’m sorry. I’ll meet you in Heaven.” When her casket went into the incinerator, Ah-reum’s family started wailing miserably. 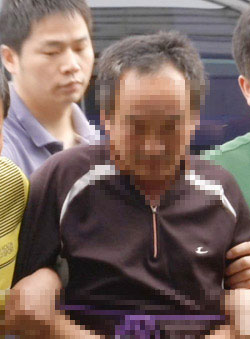 “Please be safe in a better place,” the girl’s aunt Han Won-nyeo cried.

Ah-reum’s favorite foods and fruits, including cherry tomatoes, were laid on the ancestral table in the Red Cross Hospital.

Her 20-year-old brother set down a can of soda that his sister likes. On the top of the table, a bouquet of flowers were placed by her classmates with letters, which read “Please be happy in Heaven my friend Ah-reum.”

After the memorial service, the hearse carrying the girl’s body headed to her school.

When the hearse arrived at the playground her classmates burst into tears.

“We promise that we will provide solutions for child sex crimes,” said Kim Kum-lae, the minister of Gender Equality and Family Ministry, who attended the funeral.

“Advanced countries such as the U.S. sentence sex offenders to 100 years in prison. We need to provide stronger laws like them in order to prevent this type of tragedy.”

Before the funeral was held, the suspect’s 21-year-old, Vietnamese wife visited Kim for 10 minutes.

“Stay with my parents,” Kim told his wife. “It must be hard for you to handle this situation alone.”

After the meeting, Kim spent his day reading books and magazines. “He is settled down,” a police officer told the Joongang Ilbo. “When he was arrested he was madly excited for hours and let out a horrible shriek, but he eats every meal and reads books now.”

The police confirmed that Ah-reum was strangled to death by Kim after conducting an autopsy, but wasn’t able to find any signs of rape or the time of death as the body was too decomposed. The police will conduct a DNA test to check whether the victim was raped. It takes about a week to get the results.

The police also discovered that some testimony Kim had given previously was false.

Kim told the police that he only threatened the girl to stay silent while he was taking the victim to his home, but the police later discovered that Kim in fact had sexually molested the girl in his truck after tying her up.

Kim admitted it before the detention warrant was issued by the Changwon District Court on Tuesday evening.

The police said Ah-reum lived with her 58-year-old father, brother, 20, and his 18-year-old live-in girlfriend, but they didn’t take care of her. Her mother divorced her father when she was 2 years old.

Ah-reum often missed meals or only had instant food such as ramen and spent after school hours alone because the rest of the family was working.