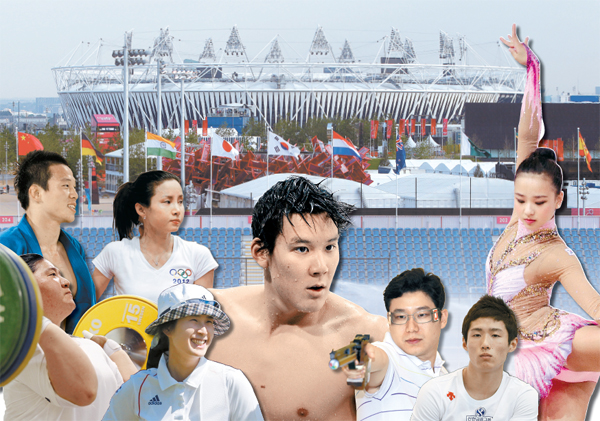 It took Korea eight Olympic outings to bring home its first gold medal. Yang Jung-mo won the gold in wrestling at the Montreal Olympics in 1976, placing Korea 19th in the overall medal count. It was the country's first top-20 finish since athletes began competing under the South Korean flag in the 1948 London Olympics. 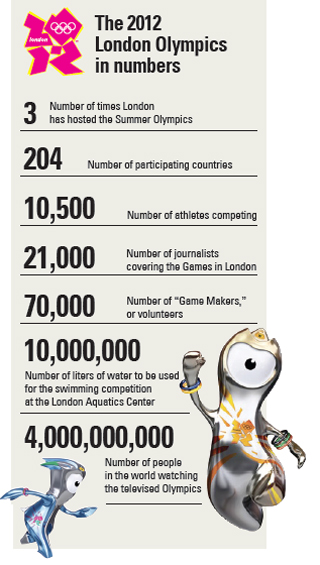 Korea now returns to Great Britain eight Olympics later with expectations higher than ever before. With the opening ceremony set for 5 a.m. early Saturday morning KST, eyes are on whether Team Korea will reach its "10-10" goal - winning 10 gold medals and finishing in the top 10 in the gold medal count.

The Korean Olympic squad, composed of 245 athletes and 129 members of the coaching staff, will participate in 22 out of the 26 events at the London Games. Korea has finished in the top 10 at six of the last seven Olympics, but only three times has it won at least 10 gold medals.

Korea brought home 13 gold medals from the Beijing Olympics in 2008, its largest total ever, in addition to 10 silvers and eight bronzes. Only China, the United States, Russia, Great Britain, Germany and Australia fared better.

Meeting the two goals simultaneously for a fourth time would be an impressive feat as Korea strives to highlight its return to London as a transformed nation, a former Japanese colony that has emerged as an international athletic powerhouse, according to Lee Kee-heung, the leader of the Korean national squad. 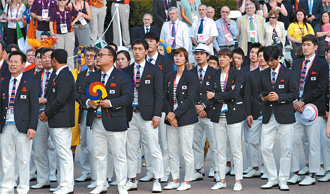 Athletes and staff of Team Korea attend a welcoming ceremony at Olympic Park in London on Wednesday. Korea is aiming for a 3910-1039 goal - 10 gold medals and a top-10 gold medal count. [NEWSIS]

“Each gold medal in London will carry a significant weight for Korea,” Lee said in a recent interview with the Korea JoongAng Daily. “We will focus on completing all of our preparations so that our athletes can show their ability to the fullest extent.”

Beyond the numerical goal, the Korean public also wants to see their athletes bring home a gold medal in a sport in which Korea has never been strong until recently. Park Tae-hwan took the gold in the men’s 400-meter freestyle at the Beijing Olympics, the first Korean swimmer to earn an Olympic medal.

Park's performance brought him to a level of fame similar to that of Kim Yu-na, the celebrity gold medalist in women’s figure skating at the Vancouver Winter Olympics in 2010.

The country’s biggest promise to trail-blaze an uncharted sport at the London Games is Yang Hak-seon. The 19-year-old reigning world champion in men’s vault, who has developed a difficult technique named after him, is considered to have a good chance to bring Korea its first Olympic gold medal in gymnastics.

The men’s gymnastics team is also hoping to earn at least three bronze medals in the individual events and one bronze medal in the team event at London. Yang Tae-young, who was robbed of a gold medal in the men’s all-around event at the Athens Games due to a scoring error, is now an assistant coach of the vaulter and other Korean national gymnasts.

The swimmer Park is once again going out to prove that his gold medal in Beijing was no fluke and that Asians can excel at swimming. The 22-year-old will try to defend his title at the 400-meter freestyle as well as compete in the 200-meter and 1,500-meter freestyles. China’s Sun Yang, 21, is among his archrivals in the 400-meter event.

Archery has been Korea’s dominant sport for more than two decades, and the Korean archery team, made up of three men and three women, will look to sweep the four gold medals in London. Korean women, led by Ki Bo-bae, look to extend their Olympic winning streak to seven. As for the men, Im Dong-hyun is aiming for his third straight Olympic gold medal.

With all the controversies surrounding Taekwondo put aside, Korea aims to continue its dominant form in the country’s traditional martial arts by repeating a four gold sweep of the Beijing Olympics.

Cha Dong-min will go out to defend his title in the men’s plus 80-kilogram (176-pound) class while Hwang Kyung-seon looks to defend her title in the women’s 67-kilogram event. Lee Dae-hoon, the winner of the 58-kilogram event at the 2010 Guangzhou Asian Games, is also a favorite to win a gold medal.

Lee In-jong, 30, made the Olympic national team after three failed bids, will also try for gold.

In Judo, Korea hopes to win as many as three gold medals. Cho Jun-ho, Wang Ki-chun and Kim Jae-bum will compete in the 66-kilogram, 73-kilogram and 81-kilogram events, respectively. Wang, who earned a silver medal at the 2008 Beijing Games, said bringing a medal other than gold to the hands of his parents will be a nightmarish scenario for him.

Shin Jong-hun, the world No. 1 boxer in the 49-kilogram men’s light fly class, will aim to wipe out the country’s longtime gold drought in boxing. The last time Korea won the Olympic gold medal in boxing was at the 1988 Seoul Games, when Kim Kwang-sun and Park Si-heon won their respective competitions.

Korea also looks to fencing and wrestling to meet the 10-10 goal, expecting to win at least one gold medal in each sport. Nam Hyun-hee, a foil fencer who won a silver medal at the 2008 Beijing Games, will aim for gold medal and judoka Jung Ji-hyun, the winner of 2004 Athens Olympics, will go out to reclaim his title in the men’s 60-kilogram category. Jung finished ninth in Beijing.

Shooter Jin Jong-oh, the winner of the 50-meter pistol in Beijing, will also try to repeat his golden performance in London.

Starting with a silver medal at the 1984 Los Angeles Olympics, Korea’s women’s hockey team has earned two gold, three silvers and one bronze over the last seven Olympics and the current No. 7 team in the world will try to bring a third gold medal home.

The men’s hockey team will also look to earn its first Olympic medal since a silver medal at the 2000 Sydney Olympics.

Kim Kyung-ah, ranked the world’s No. 5 female table tennis player, is Korea’s hope for a first Olympic gold medal in table tennis in eight years. The Korean table tennis team has raked in three gold, two silver and 12 bronze medals at the Olympics, the second best performance behind China, but its strength has dwindled in recent years facing the ever-increasing Chinese dominance in the sport.

In Beijing, Korea settled for two bronze medals in table tennis. Korea’s men’s team, composed of Ryu Seung-min, Oh Sang-eun and Joo Sae-hyuk, is also expected to vie for a gold medal with China in the men’s group competition.

Jang Mi-ran, the winner of the women’s weightlifting at Beijing, is bidding to defend her title despite concerns over her physical condition.