Tiesto, Skrillex to bring the beats to UMF Korea

Tiesto, Skrillex to bring the beats to UMF Korea 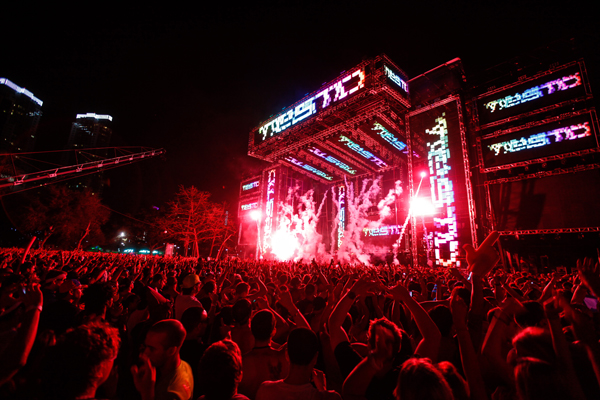 Four phases of ticket sales including VIP passes have already sold out with thousands from across the globe gathering in Seoul for UMF Korea. Provided by UMF


When the bass drops, Olympic Stadium will be the place to be next weekend as an all-star lineup of electronic dance music (EDM) DJs heads to Seoul for what is sure to be the party of the summer.

Four phases of ticket sales, including VIP passes, have already sold out, with thousands from across the globe gathering in the nation’s capital for the event. Organizers expect more than 50,000 festivalgoers.

Tiesto, the legendary Dutchman whom DJ Magazine named the No. 1 DJ in the World for three consecutive years, returns to Seoul after playing at the Walkerhill in 2008. UMF Korea will be his only show in Asia this year.

While Tiesto has transcended musical genres and collaborated with Grammy winners like Coldplay and Kanye West, fellow headliner Skrillex’s music is most commonly classified as dubstep, a genre where the wobble bass rules and sounds try to make your head explode.

Ultra Music Festival began in 1999 on South Beach in Miami, Florida. Its emergence as one of the largest EDM festivals in the world is a testament to the genre’s growing popularity in the United States.

Brittney Kiefer of the University of Lethbridge in Canada is studying Korean in Seoul for the summer. She said she bought tickets the moment she saw UMF’s headliners.

“It’s going to be absolutely mind-blowingly insane,” Kiefer said. “These are some of my favorite artists in my favorite city in the world. I would expect UMF to come to Seoul because this is a prime location. Nightclubs are very electronic and house oriented.

“I’ve seen Skrillex twice before and have gone to five or six EDM festivals in Canada, but I know this is going to break those shows in half. Everything’s going to be so much bigger and better.”

Adam Delph, a 23-year-old from Denver, Colorado, flew to Korea on Wednesday to catch next weekend’s festival.

“I have a friend living in Seoul and I always meant to come out here to visit him,” Delph said. “When I heard Ultra was throwing a show in Korea I booked my ticket and decided to make a summer trip out of it.”

Delph said the headliners caught his attention, but UMF’s reputation in the United States made him commit to the 6,000-mile journey.

“People are always talking about heading down to Miami for Ultra, which usually falls over spring break. I thought, how cool would it be to say I went to Ultra in Seoul? I’ve never been to Asia before and this is a great excuse for me to finally get out here.”

Fans from Japan, China, Taiwan, France and Australia are among the nearly 20,000 Facebook users who have “liked” UMF Korea’s page.

Ocram de Biif, an Italian currently traveling in China, wrote on the UMF page that he is stopping in Seoul to check out UMF Korea before flying back to Europe.

More than 40 acts in total are set to play at the two-day event. In addition to the four main acts, the three stages will see the Crystal Method, Sidney Samson, John Digweed, Chuckie and Tokyo Big Boy.

Steve Aoki, the Japanese-American DJ who has been credited with launching the careers of Bloc Party and MSTRKRFT, has helped define the indie-electro movement.

His collaborative track “Turbulance” with Laidback Luke has become ubiquitous in Seoul clubs.