Sol B writes book on dieting

Sol B writes book on dieting 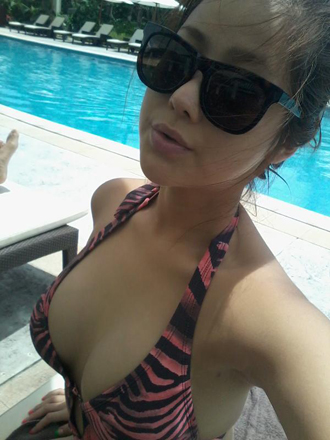 On July 25, singer Sol B surprised fans with not just a sexy picture of herself in a bikini, but with the announcement that she will be releasing a diet help book.

Accompanying a picture of herself in zebra print swimwear and sporting shades, Sol B declared, “Everyone! I’ve finished writing a book on dieting. I’m a little bit embarrassed but it’s a beauty book on diet secrets,” said the star.

Of late, the 27-year-old had appeared on various programs with a markedly slimmer body.
Just over a week ago, she also broached a taboo topic: her battle with depression.

The entertainer appeared on a KBS talk show on July 16 and confessed that for the last two years she had been battling depression while flying under the radar.
Sol B said that the she had been seeking professional mental help to recover from various scandals and internet bullying.
During treatment, she said that she fell in love with reading, a hobby that she admitted that she had never taken to before.
By Carla Sunwoo [carlasunwoo@joongang.co.kr]