Parents on edge and children at risk

Parents on edge and children at risk 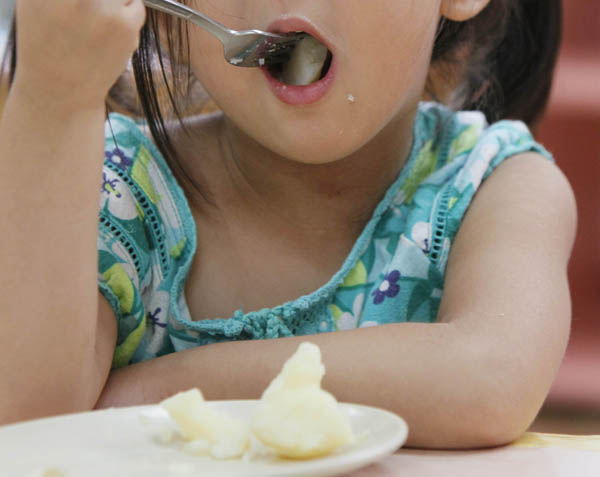 It was a hard-earned job. She studied textbook and passed a written test and an evaluation of her skills in the kitchen.

But when she finally landed a position as a cook at a private day care center in Incheon, she encountered conditions she never imagined from books or classes.

Yu, who wishes to remain anonymous, was forced to use bad ingredients in everything from broth to porridge to side dishes for children 6 years old and younger.

“I wondered where all the food came from. Be it chives or namul [seasonal vegetables], they were all stale,” says Yu, who now works at a different center. “One day there were potatoes with 2-3 centimeter [0.8-1.2 inch] purple stalks growing out of them. I threw them away, but the head of the center took them from the trash can and told me to cook them.”

Yu quit and moved to a different center, but found similar conditions and quit again.

The issue of food safety at day care centers is not new. A center in Gwangju, South Jeolla, made headlines a year ago when it served rice containing a dead snail and broth with a dead spider.

According to experts, there are simply too many day care centers to be properly monitored by the governments. Another factor is tight regulations that make it tempting for owners and operators to flout the law.

Yu has seen several violations of regulations during her two years as a cook in day care centers.

“Leftover kimchi is used for broth and porridge. Bread past the expiration date is also given to children,” she says. “Parents and teachers never know. The head of the day care center and cooks are the only ones who know the truth.”

Yu’s advice to parents is sobering: “Never expect your child to get proper nourishment at a day care center.”

While the spider broth and snail rice in Gwangju is the highest-profile example of day care food problems, it is only one of numerous Internet postings by teachers and parents who are concerned and angry.

And it was not the first time the Gwangju day care center attracted media attention.

Prior to the spider and snail incident, the Gwangju center was one of the 10 most-searched keywords at Korea’s largest Web portals because of another of its meals: ssambap without meat.

Ssambap is rice and meat with red pepper or soybean paste sauce wrapped in vegetables, but the recipe at the Gwangju day care center was different. Children were served vegetables, soybean paste and sliced radish kimchi, a meal without meat protein.

The Gwangju center is run by a social welfare foundation and certified by the government. Nonetheless, it was shut down for two months by the Seo District office of Gwangju City.

“The suspension was inevitable,” said Kim Jong-rye, an official in charge of overseeing day care centers in Seo District, Gwangju. “The day care center was already caught with poor quality food, and the snail and spider came next.”

The Gawngju center is back in business, and instances of unhealthy food practices at Korea’s day care centers continue.

Fried tofu and rice cakes 14 months past their expiration dates were found in the refrigerator of a day care center in Ilsan, Gyeonggi, last September, according to the Korea Food and Drug Administration.

The administration inspected the kitchens of 9,891 day care centers last year and found 72 nursery schools with inedible foods, such as sliced cheese 358 days past its expiration date.

Another inspection that was conducted by the Secho District office in Gangnam two years ago showed that expensive institutions are not a guarantee of quality. Seven of 18 pricey language institutes, which typically serve 4- and 5-year-olds, had rotten food in their refrigerators. These language institutes charge between 1 million ($869) and 1.5 million won per month.

Most of those with violations were fined 300,000 won to 1 million won.

No major food safety issues from day care centers have surfaced this year, but parents should remain vigilant.

The daily routine of Kim Ki-hyun, a working mother, includes logging in to the Web site of her 3-year-old son’s day care center to check what is being served.

“I have this monthly diet plan that is given by the day care center,” says Kim, who buys mostly organic food. “And then I check whether the kids eat the same menu that is written on the plan. It doesn’t take my worries away, though.

“There are a lot of rumors about day care center foods. Some say teachers take a photo of a food tray that is filled with generous helpings of rice and side dishes that are just for the photo shoot. Who knows the truth? Nobody knows. I just try to trust them.” 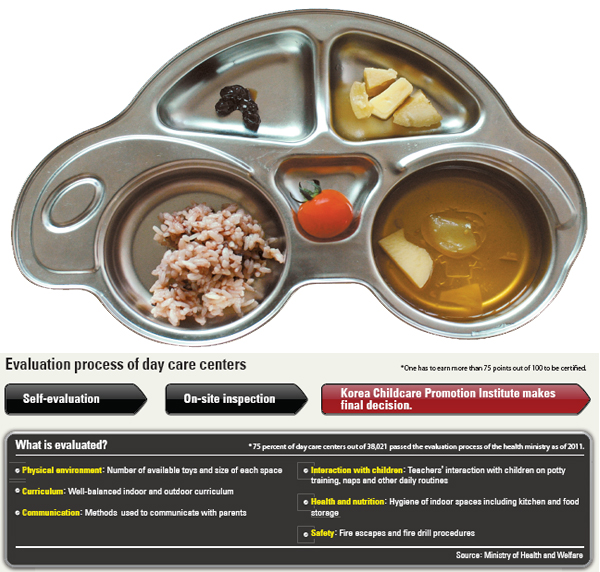 Food safety issues date to the late ’90s, when day care centers sprang up across the country due to the increasing number of working mothers.

In 2006, the Ministry of Health and Welfare introduced a quality control system called the Evaluation and Certification Process.

Day care centers that want to be certified by the government apply for the process. If they meet the requirements of the ministry by receiving at least 75 out of 100 points, they can say they have been approved by the government. Such status is valuable when persuading parents to enroll their children.

During the evaluation process, many factors are taken into consideration.

For example, each center should have either a shelter or fire escape and the size of the rooms must be sufficient for their intended use, said Kim Jeong-hee of the child care department at the health ministry.

Kitchen sanitation and the quality of food ingredients are also monitored.

As of last year, 39,842 day care centers were registered with the government and 75 percent of them passed the evaluation process.

With an evaluation and certification process in place, why do children keep eating poor meals made with stale foods?

“When the same issue keeps breaking out, there is a clear cause behind it,” says Ki Soon-shin, a professor at the center for nursery teacher education at Myongji University. “A major problem behind this never-ceasing food safety issue is that most day care centers hardly make a profit because of the tight regulations. In the end, they try to cut down on their food costs.”

According to Ki, monthly income and expenses are closely monitored by district offices because day care centers receive subsidies.

“A free rein was given to the heads of day care centers recently, though, to charge parents for extracurricular activities such as music and English,” says Ki. “In the past, the extracurricular costs were all spent, but 15 percent of the revenue can be reserved for operating costs under the updated regulation.”

Ki says some day care center heads should be blamed, but they, too, have their own stories.

“These heads operate the day care centers by paying off loans. And all they earn after paying teachers and staff is between 1.5 million and 2 million won,” says Ki. “If you’re running a business of your own, then who would be happy with that?”

Indeed, the owners of private day care centers frequently denounce the health ministry because of the many regulations. When they staged a nationwide strike in February by shutting down nursery schools for days, their main goal was scrapping the tight regulations.

Finally, the sheer number of day care centers operating in Korea inevitably make for lax monitoring at best and increase the chances that unsafe food will be served to children. Even if a day care center is certified by the government, follow-up monitoring often doesn’t happen.

According to Gang Chang-hwan, another official at the health ministry, inspections of santiary and hygiene conditions at day care centers generally occur once a year and more frequently when circumstances warrant.

“When hand-foot-mouth disease is spreading during summer, we make plans for monitoring and inspections,” says Gang.

That means that the primary responsibility for monitoring day care centers will be up to parents, who can avoid the worst centers by following a few common-sense steps.

Yu, the cook, and professor Ki advise steering clear of centers that are not certified. While not a guarantee that there will be no problems, centers with certification are generally better than those without.

“Places I worked for didn’t have any certification. It was impossible for them to pass the evaluation because everything was so messy,” says Yu.

Another key when considering day care centers is transparency. Some invite parents on a regular basis to see their kitchens.

For example, Haneulsaem Day Care Center in Gaebong-dong, Guro District, southeastern Seoul, opens its kitchen to parents who wish to have a look at how their foods are made and served to children.