Agflation fears on the up as grains get costly

Agflation fears on the up as grains get costly 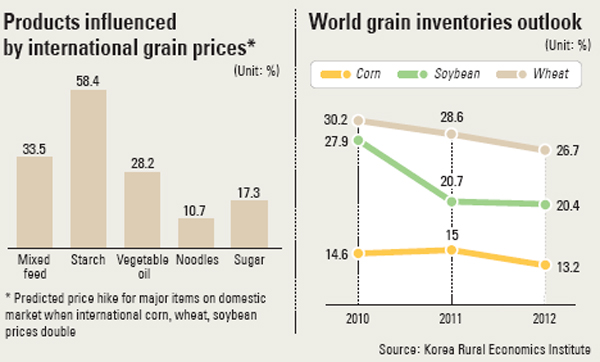 Concern is being stoked about agflation and a possible repeat of the 2008 food crisis, as corn and soybean prices have been soaring worldwide amid the worst U.S. drought in half a century.

Corn futures for December rose to $7.88 per bushel on the Chicago Board of Trade (CBOT) on Wednesday (Central Standard Time), up 1.3 percent from the previous trading day. Soybean futures for November closed at $16.155 a bushel, up 2.9 percent.

In 2008, a similar surge in world grain prices caused prices of flour and mixed feed in Korea to skyrocket as the country imports most of its grains, excluding rice.

Last week, corn futures hit a record high of $8.24 per bushel, or $324 per ton, on the Chicago Mercantile Exchange. International traders expect the price to exceed $9 next month, while meteorologists forecast the U.S. drought will continue through this fall.

To try and ward off inflationary pressure, the Ministry for Food, Forestry and Fisheries held an emergency meeting on Wednesday to discuss price-control measures with the minister and officials in the livestock, milling and animal feed industries.

The move came as the government predicted that the fluctuations in international grain prices could fuel pressure on domestic consumer prices for living necessities within four to seven months.

“We experienced an upsurge in the price of domestic flour and mixed feed in 2008, when we were in a similar situation to the one we now face, but the impact could possibly be bigger this time,” Food Minister Suh Kyu-yong said during the emergency meeting.

While the U.S. crops are falling due to the drought in the Midwest, the world’s largest grain producer and Korea’s major grain trader China is also suffering from dry weather, and Brazil is being struck by heavy rains, contributing to the current food crisis outlook.

Domestic agricultural crops are also suffering due to the heat wave after a series of droughts, floods and typhoons.

“As Korea, which imports most of its grains, is vulnerable to these price hikes, measures must be drafted to address the issue in order to tame consumer prices, as they will likely be affected by the fallout of price fluctuations,” he said.

According to the Korea Rural Economic Institute (KREI), a 100 percent increase in prices of major grains such as wheat, corn and soybeans results in a 58.5 percent rise in starch prices.

In response, the government is set to review re-applying the countermeasures it adopted in 2008 to deal with surging grain prices. These included temporarily eliminating tariffs on imports of soybeans and wheat, and subsidizing imports of feed and chemical fertilizer.

It is also planning to stabilize the price of imported grains by purchasing them on the financial market by exercising call options so it can supply them to consumers at lower prices, before they climb higher.