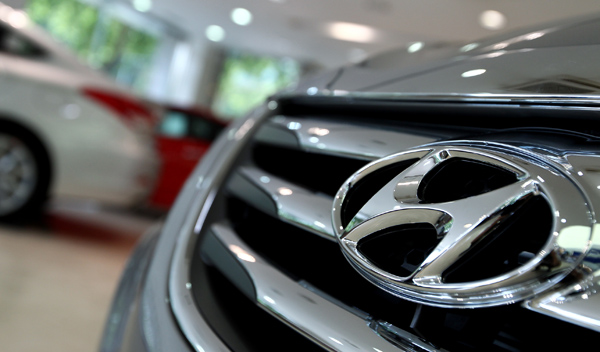 Hyundai Motor saw its net profit jump nearly 20 percent in the first half on the back of strong exports, but calls from France to activate a clause in the Korea-EU free trade agreement are threatening to hamper its growth in the rest of the year.

The so-called “safeguard clause” would reintroduce tariffs on the carmaker’s exports to Europe, a move that would inevitably eat into Hyundai’s profits and potentially jeopardize its sales. 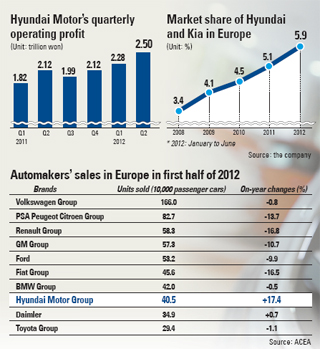 The automaker sold a total of 2.18 million vehicles worldwide in the first six months, up 11.5 percent compared to a year earlier.

“We were able to maintain steady growth on the back of overseas sales despite some losses in the local market,” Hyundai said in a statement. “We’re able to expand not only in the existing market, but in new areas as well with our differentiated marketing strategies and by enhancing our product quality.”

Hyundai Motor prospered in most regions outside Korea, even in the financially troubled European market. According to data released by the European Automobile Manufacturers’ Association (ACEA), Hyundai sold 232,454 vehicles on the Continent in the first six months, up 12.2 percent from a year ago.

The company attributed sales growth in Europe to the rising popularity of its compacts and city cars, as well as its expanded dealerships in France and Germany.

At this pace, Hyundai expects to surpass its sales goal of 4.29 million vehicles in 2012. With plans to release new models in China and Europe, as well as finish building new plants in China and Brazil, it expects to perform well despite the sluggish global economy.

“We’re not considering changing our business plan, even though we are unsure of the business environment in the second half,” said Lee Won-hee, Hyundai’s chief financial officer, in a conference call.

Lee said the company will step up its emphasis on developing environmentally friendly cars. It is working on a plug-in hybrid vehicle (PHV), which consumers can charge at home.

Yesterday, an executive at Hyundai Motor Group said it is on the right track to achieve its annual sales of 7 million cars, based on strong performances by Hyundai and its affiliate Kia Motors. The two carmakers sold a combined 6.6 million vehicles worldwide last year.

“Despite the global economic slowdown, we easily attained our goals in the first half because of the impact of our management style of prioritizing quality,” Shin Jong-woon, the group’s vice chairman, said at the Federation of Korean Industries’ business forum in Jeju.

But despite the group’s efforts, industry sources say the world’s fifth-largest automaker may face a new challenge from France, which is considering requesting a safeguard clause be added to the Korea-EU FTA, which was implemented last summer.

Arnaud Montebourg, the French minister of industry, on Wednesday accused Korean automakers of “unfair competition,” while announcing plans to revive the nation’s stalled car industry. According to foreign media reports, he said France is “justified in demanding monitoring measures, which may enable us to request a safeguard clause.”

In the Korea-EU FTA, a safeguard clause has been built in to protect local industries from “sudden surges of imports” in sensitive sectors, including small cars. If activated, it would temporarily put the tariffs that the pact has removed back in place.

Hyundai Group has been performing well in Europe despite the economic raincloud hanging over the Continent. Its sales there jumped 17.4 percent in the first half of the year, one of only several carmakers to post growth.

PSA Group, France’s biggest carmaker, posted a net loss of 819 million euros ($989 million) in the first half. It already announced it will cut 8,000 jobs while going through a 1.5-billion-euro cost reduction plan, which it expects to complete in 2015.

Hyundai Group responded to France’s claim yesterday by providing evidence to show that it is hardly benefiting from the Korea-EU FTA.

According to its data, Hyundai sold 403,015 vehicles in Europe and Kia sold 291,000, but only 10 percent of the former were exported from Korea, and 40 percent of the latter.

“The models we sell in Europe are mostly manufactured there, which shows how we help create jobs in the local market,” said an employee from Hyundai Group.